Bib, bib: It's the Ealing Skyride 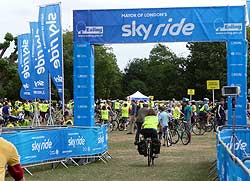 Ealing was the venue for a big Skyride today, winding 11km or so round parks and back streets, all closed to traffic. It was plied with people of all ages enjoying the freedom and individuality of, um, wearing the free yellow corporate Skyride bib. 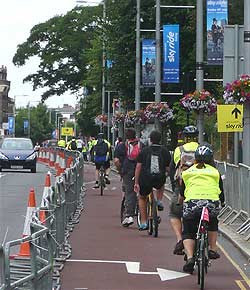 For long stretches we were going up bus lanes contraflow-style, which was quite exciting.

It was rather fun: heavily marshalled, but in a friendly sort of way, very well attended, and very well organised. If only Sky had been as organised about paying me when I used to do freelance work for them.

Not everyone was happy - one resident (below right) made their feelings plain, and a few impatient motorists ignored the STOP / GO signs of the marshals at crossing points. 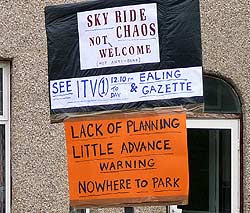 ('Nowhere to park'? Rubbish! Only one side of your street had parking bollarded out. You can walk across the road, can't you? Come on, it's only mild disruption for one half-day a year.)

Anyway, most locals seemed perfectly happy with the bikefest. Some families had put up garden chairs on the pavement outside their houses to watch the parade pass by with a small picnic.

The big Skyride, of course, is the one coming on Sunday 5 September round central London. It gives you the unique opportunity to cycle traffic-free round say Buckingham Palace, something you can only normally do, er, every Sunday. 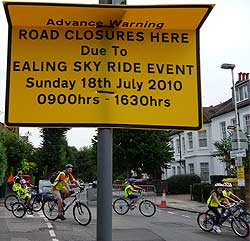 I'm not very enthusiastic about the big central ride. In fact I'm wary of the whole organised-ride schtick - such cottonwool protection is only any use if great efforts go into making roads safe and fear-free for cyclists the other 364.5 days of the year.

But we think these local Skyrides (such as Hounslow's last year) are a good thing. They give nervous cyclists, families, and the curious, the chance to enjoy roaming around car-free and at leisure. So long as it's only one small, initial, part of the picture, we're for them. 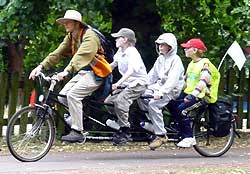 This family, on a four-person school-run bike specially made at St John St Cycles, wasn't nervous at all. The only thing they're uncertain about is how much they'll get for it on eBay. It's for sale there, apparently. Try something near two grand.