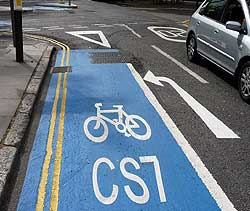 Final preparations for the launch of the first two Superficial Cycleways, CS3 and CS7, are moving on apace. And it's good to see forward-looking, pro-bicycle facilities such as this, on Keyworth St at the back of the Elephant.

The mandatory cycle lane - which drivers are not allowed to enter - has taken up most of the space here, leaving only 60cm for motor vehicles. Perhaps it was laid out with the pencil-thin electric solo transport vehicles of the future in mind.

Meanwhile, luckily, no driver of a conventional width vehicle is going to ignore that by, say, swooping into it when forced to do so by a car coming the other way.
Posted Sunday, July 11, 2010