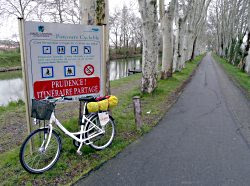 I was in France last week, cycling the Canal du Midi (picture).

The 240km long engineering marvel, linking Toulouse with Beziers via Carcassonne (and hence, with other watercourses, the Atlantic and the Med) offers a flat, traffic-free cyclable route through the south of France. What's not to like? 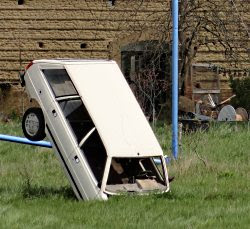 Well, er, quite a lot, actually. The 40km east out of Toulouse is superbly surfaced, and skatable-smooth. But the scenery is as dull as yesterday's croissants, and you don't go through any towns or villages. It's plain boring.

About the only noteworthy sight is this car sculpture in a farmyard near Gardouch (picture), which may be a comment on French driving. 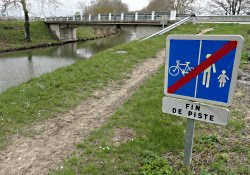 Once the tarmac finishes, you're into the canalside lottery familiar to English towpath riders: a mishmash of smooth gravel, bumpy gravel and muddy, lavishly-puddled paths (picture).

Fine on a mountain bike, but what's the point of a mountain bike without mountains? I did it on a shopping bike, because at least there were some shops. And the front basket was big enough for a baguette, bottle of red and slab of pate. 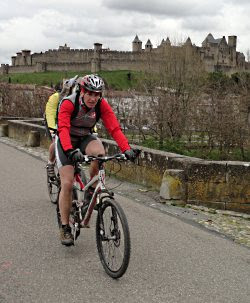 Carcassonne, with its magnificent medieval walled town, is a highlight. You can cycle to it across the traffic-free old bridge (picture).

Its old town is magnificent, though some aspects, such as the towers' pointy roofs and the cycle parking by the entrance, are evidently inauthentic.

The Canal du Midi is, in sum, a bit dull; for me, exploring France by backroads is much more interesting. 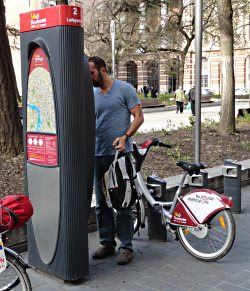 But Toulouse itself is of interest to the real cyclist. It has a bike hire scheme (picture) along the same lines as that in London or Paris. 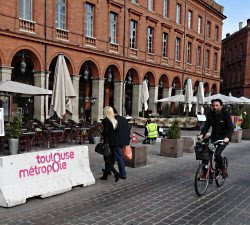 You wouldn't call it a Cycling City - it's not Cambridge, but then, where is? Oxford, perhaps - though Toulouse has a steady trickle of everyday cyclists (picture). 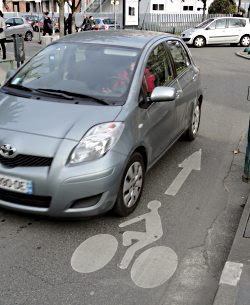 The flatness helps, but so does the permeability. In the centre, it seems every street, even if one-way for cars, is two-way for cyclists.

Often these lanes are startlingly narrow, but I had no problem with the salmon-thing, cycling against oncoming traffic (picture). 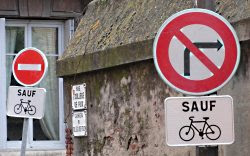 Indeed, French drivers seemed on this trip very good at overtaking me with plenty of space on rural roads, and driving safely and steadily on cramped city streets such as this (picture). I wish English cities were as flexible with bike contraflows.

Perhaps that farmyard sculpture in Gardouch isn't a comment on French driving after all. 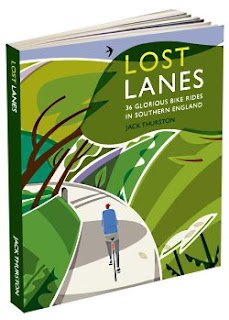 It’s a sort of routes-guidebook, describing 36 Home Counties rides; but it captures the real essence of cycle-exploring far better than the average cobbled-together routebook clone you see bookended in Waterstone’s.

Real cycling, as Jack knows, is not about cycling; it’s about what else it enables you to do. Those of a cake-stop or pub-destination mindset will know exactly what I mean.

And, indeed, the book’s routes – from marked ones such as the Crab and Winkle way to bespoke back-lane delights – are rated for, say, pub and good-food opportunities en route. But they also reveal the sort of mildly bohemian adventure you don’t usually associate with the posh South East: wild camping, wild swimming.

It’s possible to see wildlife in London, of course, though this is usually the sort that throws stones at you on the Walworth Road. Lost Lanes gives you a genuine taste of wilderness, a more metaphorical stone’s throw from the capital.

These routes don't require helmets, lycra longs, or a 4x4 with a bike rack (train access is listed for every route): only a sense of adventure. And, perhaps, a picnic, your trunks and tent. And your iPhone, to make your Facebook friends insanely jealous of your carefree, vibrant lifestyle.

So get this book and set out on your bike the next warm sunny day. Er, when the warm sunny days actually do arrive. Clearly, the photoshoots for the lovely images in the book must have been done on last year’s one rain-free weekend...