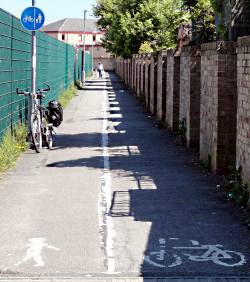 And what about pedestrians? They don't know where they stand. Literally. Though they'll probably stand in the middle, with their back to me, listening to their iPod. That's what they usually do.
Posted Friday, May 25, 2012 3 comments:

Not half bad: Green light for bike-friendly Barcelona 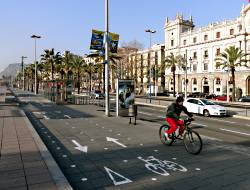 It's dispiriting to compare our current chilly spring with Barcelona's. I was there in March and it was lovely.

It's dispiriting to compare Barça's cycling situation with London's, too. The Catalan capital has gone from having no bike culture to a thriving one in just a decade or so.

I know which capital I'd rather live in too, and it's not just because of the two-euro bottles of wine and Mediterranean beachside. 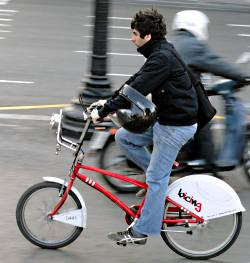 Partly Barça's bike-friendliness is due to the very popular cycle-hire scheme, 'Bicing' (right) - for locals only, sadly, so I couldn't have a go on one.

Partly it's due to the system of cycle tracks round the city centre (top right), taking advantage of those wide boulevards. A bit skeletal, but useful; outside it, Barça's cyclists thread in and out of pedestrians in the narrow streets of the old Barrio Gotic, and nobody seems to mind much.

Whatever the case, the cycling scene is strong. And none of this hi-vis-jacket-and-helmet nonsense you have in London: like York, it's full of normally-clothed people just getting from A to B on two wheels. 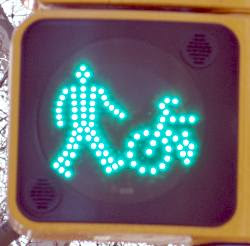 And one traffic light caught my eye (right). Not only does the pedestrian appear to be kicking the bike - perhaps he's annoyed with so much pavement cycling after all - but there's only half a bike.

Perhaps it's the missing front half of the traffic light in York I noted recently...
Posted Tuesday, May 15, 2012 1 comment:

Water under the bridge - and over the cycle path 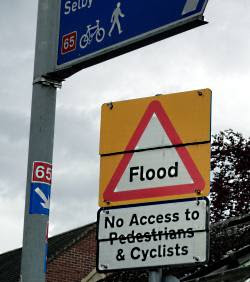 It's also gearing up for the York Mystery Plays in August, the first such for decades.

But right now there's a more pressing York speciality on our minds: city-centre flooding on the banks of the Ouse.

It's not an infrequent state of affairs, as shown by the permanent sign just off the riverside path (right) ready to be deployed, rather wearily, whenever there's another period of relentless rainfall - or as it's called in Britain, 'hosepipe ban'. 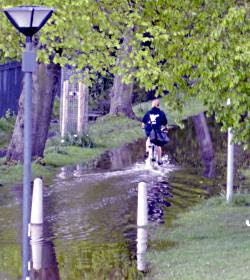 For anyone doing the Trans Pennine Trail or White Rose Route, they either have a detour along Bishopthorpe Road, or some aquaplaning along the inundated cycle track (right). 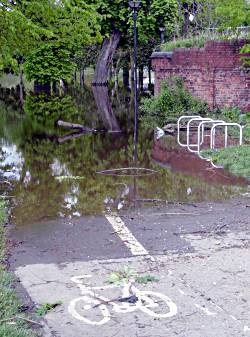 Over the Millennium Bridge on the other side of the river, things are no better.

It's not as bad as it can get. Levels were a foot or two higher back in January, for instance.

But with more rain forecast for this week, it might be time to invest in an ark.

Which, funnily enough, is one of the scenes in that Mystery Play... somehow it's all now making sense.
Posted Sunday, May 13, 2012 No comments: