Sewage and sundials: Bike path by the Olympic stadium 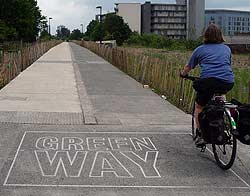 The Greenway, a traffic-free path from Bow to the splendidly named Beckton Alps, makes a more interesting bike trip these days thanks to the Olympic construction. 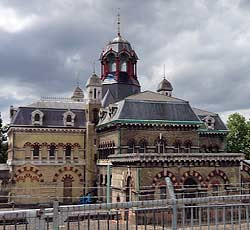 The Greenway's chief architectural claim to fame has always been the majestic sight of the Cathedral of Sewage, Bazalgette's pumping station disguised as a Byzantine palace, a sort of Victorian Katie Price in brick. 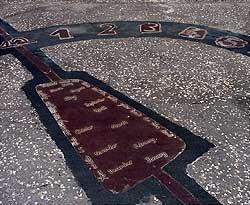 But now the Games are coming, and the Greenway is being spruced up. Outside the Cathedral there's now one of those nifty sundials where your own shadow tells you the time if you know the month, or vice-versa. 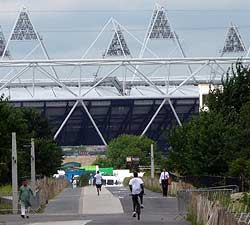 And the Greenway runs through the 2012 Olympic Park, or as it is currently, Building Site. It means the path is currently chopped in two, with an awkward but exciting detour through the works. You'll get lost, but the chaps in hard hats will helpfully put you through the right corridor and round the right JCB. 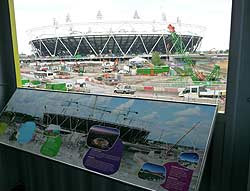 The path affords a splendid view of the stadium itself, the growing velodrome, water stadium, and all the rest of the site. There's a sort of visitor centre too, ViewTube, in orangey-yellow metal containers, which has fine coffee from the Container Cafe downstairs and a viewing platform upstairs.

The cafe has a sister, the Counter Cafe at Roach Road, a few yards north of the western end of the Greenway. This is worth dropping in on too: it has an informal yard with lots of seats, tables and bike parking, very nice Anzac biscuits - and entertainingly decorated urinals. Bazalgette would surely have approved.