Kennington-cross: No joined-up thinking on CS7 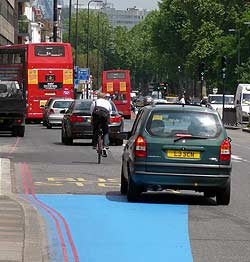 The first two Cycle Superhighways launch on 19 July, and they're progressing by leaps and bounds.

Which is a shame, because they're supposed to be smooth and continuous. 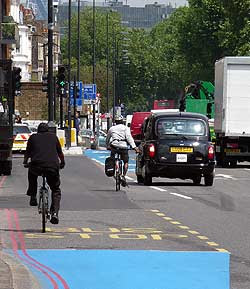 The blue paint is down already. This is evidently the final shape of this part of Superficial Cycleway 7, Merton to City.

Here's what Mark Knox, a chap who trusts his eyes and ears rather than TfL hype, said about it on the Lambeth Cyclists e-group a couple of days ago: 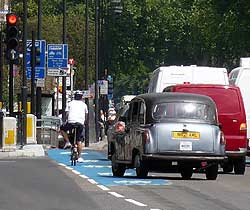 It seems that the engineers, acknowledging that there is no safe way, in the present road layout, for cyclists to make the straight-ahead movement, have decided not to commit themselves by recommending a way.

So the superhighway hugs the pavement up to the bus stop by the parade of shops, vanishes, then magically reappears about 80 yards on in the centre of the road. Between those two points it is presumably every cyclist for themselves, as you fling yourself across a lane of speeding traffic.

The superhighways have been sold as "safe, continuous routes". Here, at the most hazardous point of the entire northbound route, this one seems neither safe nor continuous.

Personally, making that straight-ahead movement, I would always get myself in the right lane at the start of the junction and stay there, making my intentions as clear as possible to other road-users. Most cyclists I observed this morning were doing that, rather than following the paint. 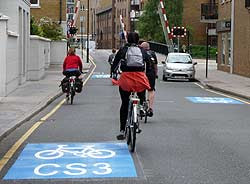 The CSs are not even 'just a blue stripe'. In many places - such as Narrow St (right) on Superficial Cycleway 3, Barking Mad to the Bloody Tower Gateway - they're a disjointed series of hopscotch squares.

So - for the millionth time - what is the point of the Superficial Cycleways? 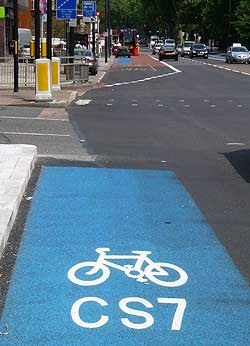 They add no new safety features. (Some bits of the existing bike routes, such as Cable St and the Elephant and Castle by-pass, have been smoothed, resurfaced, and slightly widened in very short stretches. And that's good, thanks - but that's all stuff that should have been done anyway.) 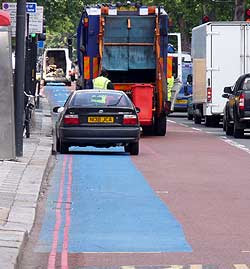 They're not continuous. (They stop wherever there's a bus stop or a parking space - that parked car is there quite legitimately.)

They have no legal force - they are not mandatory or even advisory lanes, except where those were in operation already.

So what are they?

Well, like a cobalt-coloured spray-on tan, they're a well-marketed cosmetic. Rating for branding and marketing: 9/10. Rating as cycle facility: 2/10.