We were there at our local docking station by the Elephant and Castle at 6am this morning at the very moment the London Bike Hire Scheme launched. 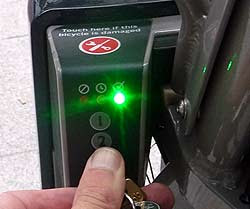 It's mostly good news. The member-key system works fine. Taking a bike out is easy and quick: you don't have to log in, you just stick your key into a slot, release your bike and cycle away.

Redocking it automatically checks it in: you don't have to log out or do anything. The bikes are fine: a bit low-geared perhaps, and the front-heavy handlebars can feel like you're pushing a wheelbarrow full of cats; but they're comfy, straightforward, and hop-on-hop-off easy to ride. There's no lock: so what? Use the next docking station. And no helmet: quite right too.

For £1, about the third of a cost of a muffin or coffee on station concourse, you can ride the bikes for any number of half-hours in a day free. 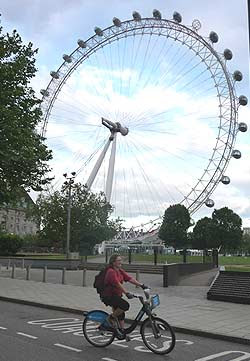 We breezed around in delight between various docking stations on the south bank this morning between 6am and 7am. We only spotted two other pioneers riding hire bikes in that time, one of whom was the editor of a certain local news website.

We spotted several snappers and film crews, though, some of whom spotted us before we could escape, so you may see us on TV tonight.

Over 11,000 people have signed up for membership keys, though only 4,000 have activated them.

And there are about 4,700 bikes currently available at the docking stations, of which there are 284, 330, or 360, depending on whether you believe the Evening Standard, TfL yesterday, or TfL on Tuesday.

Some people will complain that the hire bikes will mean untrained people with no idea about British road rules careering dangerously about the streets. People such as TfL-licensed minicab drivers, for instance, who no doubt think that's their prerogative. Well, tough. Share the road and play nicely. It's ours too, you know. 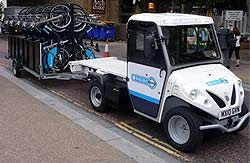 Bikes that need to be redistributed from full docking stations to empty ones are conveyed by trailer pulled by electric cars like this one.

Now, the teething problems. Some of the bikes have had their brakes overtightened, so that the back wheel hardly goes round. Pedalling one of these feels like going uphill, or cycling home after a particularly large and convivial dinner. (This affected several bikes we tried at the Southwark St station, and the one I took out at Ontario St.)

The problem with this is that if you take a bike out, find it's stiff and then re-dock it, you have to wait five minutes until you can take another one out. So pioneers are advised to check the back wheel spins OK before putting your key in to take the bike out. Otherwise you'll have five minutes to fill, and presumably in London docking stations are like bus stops and you're not allowed to talk to anyone. 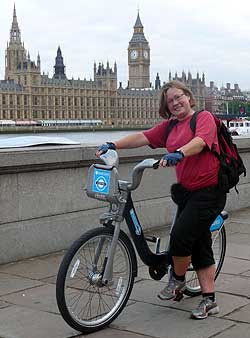 And, inevitably, some tedious whinger had put stickers on some bikes complaining about Barclays sponsoring earthquakes in the third world or something, which involved extra work for some TfL people this morning going round unsticking them.

Working out where the live docking stations are isn't yet totally reliable either. We couldn't find out from the docking station terminals we were at this morning because they didn't appear fully operational, though the SE1 website's report on the launch at the Belvedere Rd station, Boris Johnson and all, evidently had no problems.

There's the printed TfL map - but it was compiled a while ago and it shows some docking stations that haven't been built (such as the one on Lambeth Bridge).

And the online TfL map shows the updated locations of docking stations, but some of them haven't actually gone live yet (such as the one on Albert Embankment, just down from Lambeth Bridge, which was covered with tape and not yet in service this morning).

But these will be fixed. For the meanwhile we're delighted to see the scheme up and running. We think this has added a fun and creative new dimension to London's bike culture and we're all for it. There's more of this to come.