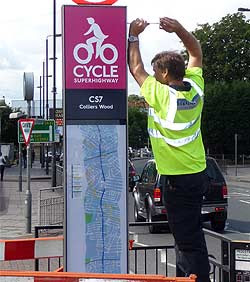 The Cycle Superhighways launch tomorrow, and the last-minute preparations were being done on CS7 yesterday when we cycled along it from Tooting to Southwark Bridge.

Many things about the Superficial Cycleways are very good. Unfortunately these very good things aren't actually the cycle lanes.

The information posts - such as this one, being installed at the start by Colliers Wood tube - are excellent. They're easy to find, well designed and full of useful information: local street maps, overall route diagrams and useful phone numbers.

They also have possibly ambitious timings which suggest you'll only take 30 minutes to get from Clapham South to the City. If you're as easily distracted by south Indian food as us, you can double such figures in the restaurant quarters of Tooting. 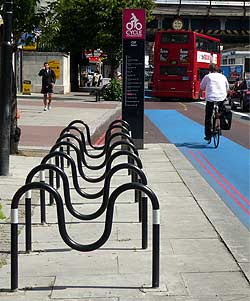 There's even a 'north' pointer set in the pavement at the bottom, so you can reorient yourself after a bus knocks you off your bike.

There's also a great many new bike racks in the southern half of the route, in the M-shaped 'Camden' style. Quite a few of them even have enough space between them to park two bikes per rack. 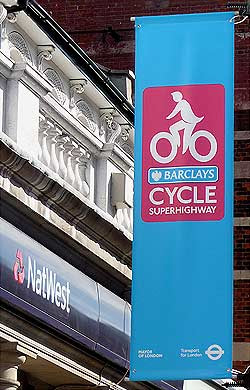 The chaps installing the info post joked that the pink logo of the bike rider is based on Boris Johnson. As the rider appears to have no grip on any steering mechanism, perhaps that's appropriate.

There are also lots of banners going up along the route, declaring the sponsorship of the routes by Barclays. 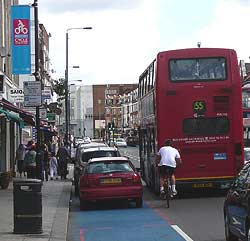 We think this is a splendid idea, as it adds yet another useful piece of route labelling. You need this a lot on CS7, where the blue stripe disappears constantly under parked cars, and the blue squares in the middle of the road are submerged by buses.

We'll be reporting from the official launch at Clapham Common tomorrow morning. Meanwhile, have a look at the video report on CS7 by Green Party assembly member and real cyclist Jenny Jones, who sticks up for cycling in a genuinely useful way.