Are we sitting comfortably? Two on a Brompton 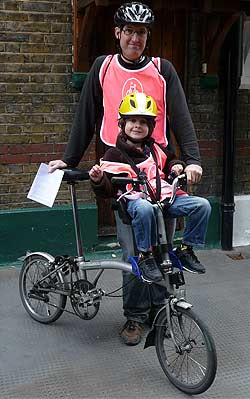 You don’t see many Bromptons with a child seat, but it can be done. The seat on this chap’s is a standard production model which, apparently, isn’t made any more, whatever it was. Obviously you have to remove it before you can fold the bike up, but he says it only takes a minute or so.

He’s never had any problems. But it’s doubtful anyone would dare make child seats for folders, on health and safety grounds. And if they did, they’d probably have to come with a warning sign saying REMOVE CHILD FROM SEAT BEFORE FOLDING BICYCLE.
Posted Wednesday, July 07, 2010