Plus ça change: Bikes through the ages at Rapha 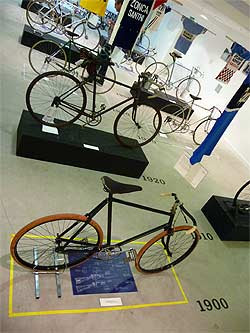 Even if you're a real cyclist who considers the Tour de France a good ride spoiled, we recommend nipping into the Rapha cafe, the über-stylish racers' pop-up in Clerkenwell that we've blogged about before, this week.

While the Tour is on - this week, then - they have a fabulous exhibition downstairs of racing bikes for every decade through the 20th century. (It's actually in celebration of the 'centenary of the Col du Tourmalet', an age geologists might dispute.)

The remarkable thing is, of course, how little bikes have changed since 1900. The single front brake on the century-old model is pretty rudimentary, but otherwise with a respray it could be a trendy single-speed next to you in today's ASL, Brooks saddle and all. 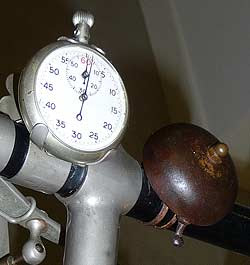 As the decades roll on, gearing technology develops from alarmingly crude levers on the rear seatstays, but otherwise the most noticeable change is the choking algal growth of sponsors' logos.

And the handlebars of this bike - from the 1910s - show the cutting-edge technology used by the club racer of the post-Edwardian years.
Posted Tuesday, July 20, 2010