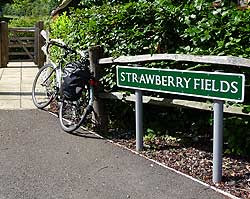 Cycling through the small village of Farnborough, near Biggin Hill, the other day, I was startled to see a street sign for Strawberry Fields. I never did have a clue what John Lennon was on about in that, or any other of his efforts, but it made me wonder what other Beatles songs might be on the London area streetmap.

Sure enough, there’s a Penny Lane out in Walton-on-Thames (near the Shepperton Ferry). No hard-working barbers or well-maintained emergency vehicles on it, though. 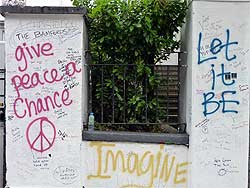 And of course there’s Abbey Road, scene of the iconic album cover. The area immediately outside the studios, by pop’s most famous zebra crossing, is something of a shrine now. Clumsily graffitied lyrics adorn the walls, and tellingly most are Lennon’s, which seems appropriate. 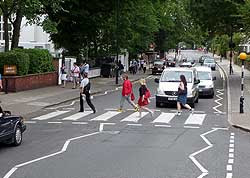 At the crossing itself, there’s a perpetual group of psychogeographical tourists taking pictures. It annoys the taxi drivers something rotten, so that's something positive.

The album cover shot was done in a hurry by a snapper on a stepladder, but the road’s far busier these days and you’ll get honked at and run over if you try the same. 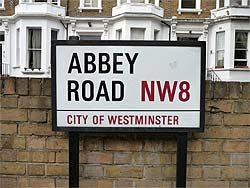 The area round here is all wide avenues and big posh villa houses. (Primrose Hill, which Wikipedia suggests was the inspiration for Fool on the Hill, is just round the corner.)

From Abbey Road studios it’s a mile or so of gentle downhill-ish scoot to Marble Arch. If you can’t be bothered to cycle out that way, Abbey Road studios kindly provides a live webcam of the world’s most famous pedestrian markings.