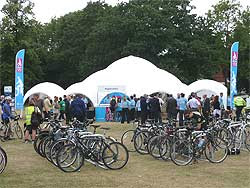 The Cycle Superhighways were officially launched this morning in a marquee on Clapham Common. 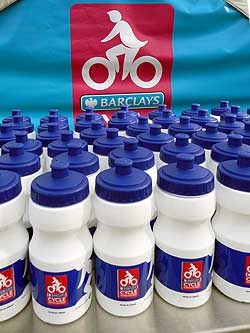 Funny, though: the water bottles were superbly branded with 'Cycle Superhighways' on the outside, but when I examined the contents, there was nothing but hot air.

My views on the Woeful Woadways are well known: they're blue paint on the road, no more. A recent BBC website feature agreed. 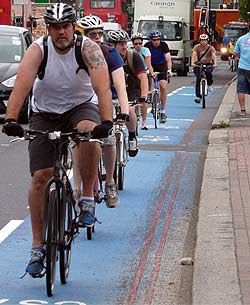 But in the Speeches, David Brown of TfL made a valiant effort to justify the multi-million pound expenditure on the cobalt-coloured calamities.

He drew our attention to the 84 new ASLs, 37 Trixi mirrors, 17,500 hours of cycle training, led rides every borough, changes to junctions at Stockwell and Kennington, traffic calming at side junctions, 5,000 new bike parking spaces, and all those subtle resurfacing improvements, such as around drain covers.

Brave try, but all the manhole-margin facelifts in the world can't disguise the fact that nothing significant on the roads has changed except the blue paint. 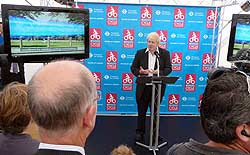 Still, after a reassuringly dull speech from a Barclays rep - reassuring because I don't want a comedian looking after my mortgage, thank you, I want a reliable plodder – you could sense the relief when Boris stepped up to the plate.

And he didn't disappoint. Whatever you think of him – and I don't think many US profanity filters would allow me to write my opinion here – he is a real cyclist, as well as being a charming, funny and witty speaker. It wasn't so much a speech as an appearance on Just a Minute. 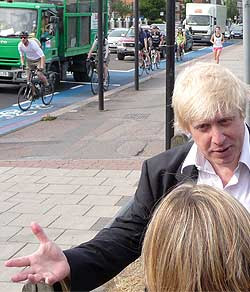 Yes, he'd cycled here, at "the pace of an elderly French onion seller", obeying all the traffic signals and "stopping like a pillar of salt at the lights". Yet it had taken him just 35 minutes from Islington, during which time he had overtaken a boy-racer several times in an open top sports car.

Boris had everyone laughing, though he made me laugh most when he said that by coming via the CS7 he'd arrived in "every possible comfort and style". 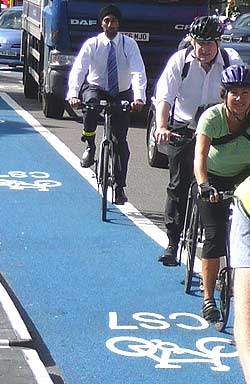 He spent half an hour or so doing interviews – Boris sure gives good headline – and finally cycled along the CS7 back to the city.

So: it was a good morning all round, with all the self-referential activity you expect at cycle jamborees these days: bloggers, local radio journos, small-time TV crews and PR hacks, all interviewing each other. I rather enjoyed myself.

All the great and the good were here. Plus some rather mediocre cycle bloggers, snagging whatever free things they could. Speaking of which, I got a gratis chewy cereal bar, too - result! So the Superficial Cycleways have done something positive for me after all!