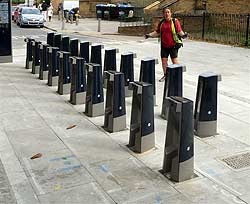 We had a full day of wheeling round London on the new hire bikes yesterday. Our second impressions are much as our first: there are many teething troubles, some urgent but straightforward to fix, others more challenging and long-term. But we're still very positive about the way the hire bikes will add to the capital's cycling culture.

First, the urgent but straightforward-to-fix. There are too many bikes with overtightened brakes whose rear wheels hardly go round - about half of them, I'd guess. Some stands had few, or no, bikes with acceptably smooth rear wheels. This must be addressed over the weekend, or else a large proportion of the bikes aren't usable.

Second, and potentially more challenging, is the problem of cycle flows. During the afternoon, every docking station we saw had both bikes and docking stations available.

But in the evening rush hour it was different. Round Elephant and Castle, presumably because of commuter flows outwards, the docking stations were empty of bikes. We had a quarter-mile jog from this one, at Hampton St, to the next station with available bikes. (At least the information screens telling you where to find the nearest available bikes were mostly working.) 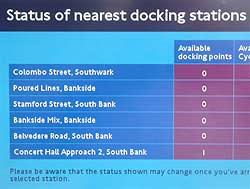 Conversely, the magnet-stations around the South Bank were all full. This is more serious. If you can't dock your bike you can ask for extra free time somehow (I never quite found out how in my rush to redock) and cycle to the next station with free docks. This wasn't easy at the South Bank last night, where the six nearest alternative docking stations offered a total of one free space, which had gone by the time I got there.

It was all rather exciting; I've always wanted to go orienteering. I found a vacant space near London Bridge eventually, almost a mile away, but it meant a long jog back to my intended destination, and that did rather defeat the point of hire bikes. 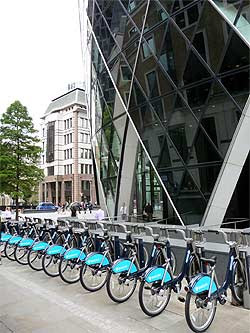 (Yes, this full docking station in the picture is in front of the Gherkin, not the South Bank. I didn't have my camera during my South Bank exercises, and anyway the pictures would have been too blurred.)

This, we expect, will be sorted out eventually. It's trickier than taking a spanner to a few thousand back brakes, though. The transfer-trailer wagons that scoop up spare bikes and ferry them back to empty docking stations will be very busy in the coming weeks as TfL work out how the flow patterns work. We pioneers are also guinea pigs, and there could be a few more unscheduled jogging sessions for some of us.

I didn't know the hire bikes were going to keep me so fit.

A few other niggles too: some docking stations weren't letting you take bikes out (St Paul's); some screens weren't working (Godliman St); sometimes the docking post didn't register your bike as docked even when you couldn't get it out again.

But it's remarkable that the scheme is working to any extent, given the Boris-induced schedule it's been put together to. We're pleased to have it working, even if it is only eighty per cent right at the moment.

And all those provisos apart... we still had a great time shuttling round between all that London stuff: free outdoor concerts, cafes, museums, sights, and surprise table tennis at the Barbican. There was a camaraderie among the first-day pioneers, and lots of smiling double-takes from passers-by. 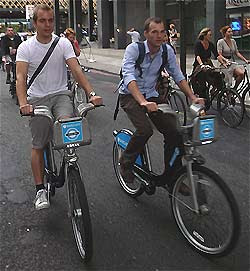 We're convinced the scheme will bring a new dimension to exploring and commuting round London. Several times yesterday we were shouted at by blokes in vans and taxis - not telling us to get off the effing road, as usual, but giving us thumbs-up and saying whoa, nice bike, how do I take one out?

And every docking station had curious and bemused groups of tourists and locals poking about the stands and prodding the screens, asking us what was going on and then nodding thoughtfully.

Problems? Yes, lots. Inevitably. But we still think it's a very promising start.