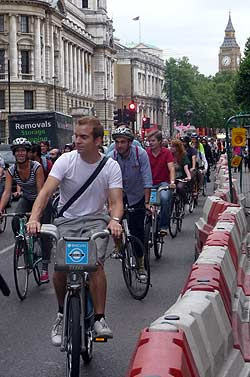 It so happened that yesterday, the launch day of the London Bike Hire Scheme, was also Critical Mass day.

Inevitably, a few CMers turned up on hire bikes, prepared to pay for their hire by taking the machine out beyond the half-hour limit for free use. To a Yorkshireman like me, that's heroic stuff.

The Mass went round Parliament Square, with the usual cycle-brandishing schtick that has become a provocative, and to me rather irritating, symbol of CM. 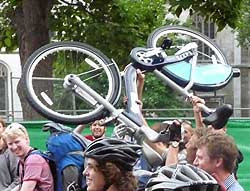 And, to enormous cheers, someone managed it, semi-ironically, with a Hire Bike. He's a strong guy: those bikes weigh a ton.

I like semi-irony. You can claim it was either serious or joking afterwards. That's why I'm semi-ironic half the time, and only semi-serious the other half, though obviously that statement is tongue in cheek.

Anyway, we were glad to see the Hire Bike Massers were obeying the TfL guidelines and not putting a dog in the front carrier, which is expressly forbidden. 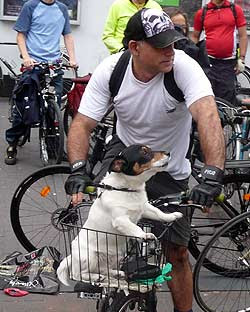 You need a proper basket for that, as this chap at the mass last night demonstrated.

Yappy, dirty, unruly, annoying: yes, a few people on the Critical Mass can be a bit tiresome. But the vast majority are simply normal cycling folk like you and, er, me. And the Jack Russell here was just as well behaved.