The Future Now: Cycle training on a Hire Bike 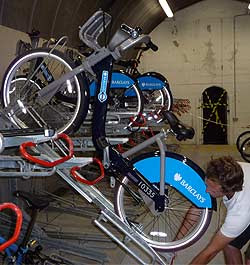 I had a spin on a Hire Bike on Friday. Southwark Council residents (like those of other boroughs) can claim a free cycle-training lesson, and you can opt to do it on the same bike that clueless tourists will be using to plough into taxis on the wrong side of the road when the scheme opens on 30 July.

Riding a Hire Bike
First, the bike. They're solid and smooth, easy to step on and off off, steady and comfortable to ride. Saddle heights have a scale on the seatpost so you can remember your number for speed of setting next time. They cope with heights from about six foot six to five foot, so basketball teams or female Chinese gymnasts might have to make their own arrangements.

Your luggage sits in the small front rack, which makes the already weighty handlebars a bit more so. TfL guidelines tell you not to put animals there. It would just about take a Jack Russell, though they'd soon chew through the bungee cord. 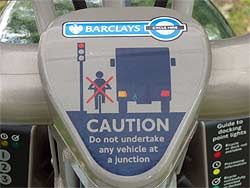 A sign on the top of the stem reminds you not to go up the inside of lorries. We hope there's a complementary sign inside that HGV cab from Lithuania that scythed horribly across me at the Elephant the other day.

Brakes are pretty good, and the three-speed hub gears silky and sensibly low-ranged. One oddity is that the twist-grip changes gears the continental, 'wrong' way round, so domestic users may find themselves perpetually changing up instead of down and vice-versa.

Cycle training
Second, the lesson. I was pleased to see that Craig, my affable and expert guide from the company Cycling Instructor, was a real cyclist: no helmet, ordinary clothes, and a tatty old shopping bike.

I'd strongly recommend claiming cycle training even if you, like me, are a confident road user. The main point is that most cyclists don't use the road assertively enough. Accidents happen when cars are at your side, not to your rear (well, unless you're dealing with a psycho, like that bus driver who tried to ram me in the City last Friday, or the one who undertook me crazily outside Morley College on Saturday). Amigos, ¡no pasaran!

And, like me, you're probably not claiming enough road space. For instance, when waiting at a junction with oncoming traffic to turn right, you're waiting too far over to the right, then getting squeezed between the oncoming traffic, and traffic going straight on that you've therefore allowed past.

In once sentence, the lesson of the lesson would be: Claim the centre of the lane, and don't get put off by hooting or shouting. Or, if you're allowed a second sentence, intimidatingly revved engines, verbal abuse, or missiles. 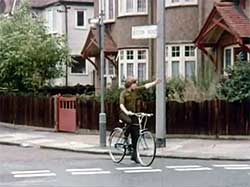 Women are much more likely to take cycle training than men. The blokes, apparently, think it's a bit juvenile, and smacks too much of boyhood and Cycling Proficiency adverts with Keith Chegwin (right and below right).

So I have a suggestion. The cycle training lessons should be rebranded for men as Super Advanced Cycling Mega-techniques for Power Commuting. With the content staying exactly the same. 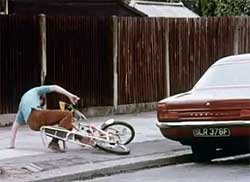 After all, it's the same trick TfL have pulled with the 'conversion' of existing cycle routes to 'Cycle Superhighways'.