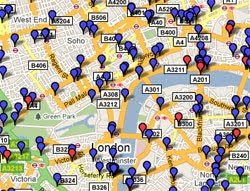 Killed by a lorry turning left: the story is depressing and familiar. So far in 2010 three London cyclists have died in HGV collisions: academic David Vilaseca Perez, 46; medical student Muhammad 'Haris' Ahmed, 21; musician Shivon Watson, 28. We're on grim course for another typical year: ten such deaths is about par.

As Moving Target says, an essential problem is that nobody saw what happened. Not passers-by, buried in the tunnel vision of their commute. Not the driver, multitasking with a hall of mirrors, conflicting road signs, a crazy schedule and illogical roadworks. And not the cyclist, because they never made it to their destination.

No fuzziness over this stat, though: in 2006, 2007, 2008 and 2009, HGVs were the vehicle involved in 47%, 46%, 88% and 69% of cyclist deaths respectively. Generally accepted figures show that more than half of fatal lorry-bike encounters happened when the lorry was turning left. As the Bike Show reports, it's also recognised that over half of lorry-bike deaths happen in morning rush hour.

The British Medical Journal's estimate (stated in 1994, but remaining true) is that in inner London, in relation to their traffic volume, HGVs cause 30 times as many cyclists deaths as cars and five times as many as buses. "Until the factors leading to this excess risk are understood, a ban on HGVs in urban areas should be considered," they said.

This blog, and several others, is not calling for a ban. But we are calling for a modification to a current rule that seems to us perverse. Lorries over 18 tonnes cannot drive through central London (except with a special permit) from midnight to 7am. Which puts drivers under intense and unreasonable pressure to cut corners, in every sense, every morning rush hour, when vulnerable users such as pedestrians and cyclists are at their peak. We are campaigning for the ban to be lifted.

You can make a statement by turning up to Critical Mass this Friday 26 March, which meets as usual between 6pm and 7pm at the National Theatre on the South Bank, under Waterloo Bridge. Of course, CMs are not organised and what happens is what happens, but many participants will no doubt be keen to stop at the spot near the Shard building site where Haris Ahmed made his fateful final journey. This is an important CM that may well draw some media coverage, and we urge you to take part.

Cycling is still safe... we keep saying. Yeah, like paragliding or rock-climbing or space exploration. Deaths are microscopically unlikely.

But injuries aren't, and near-misses are common, as CityBeast's cycle accidents map (see graphic, above right) grimly demonstrates. Most of us probably have a few more bristles on the brush with death several times a month. I accept it; most don't. Sane people would take the bus over a Space Shuttle re-entry every time. And it's a vicious circle. By putting people off cycling, such concerns help recolonise the roadspace with fast-moving motor vehicles.

That general climate of car-centric culture is the problem, and HGVs are only a small part of it. But what's the answer? I don't know. It's not in the back of the book. I'm not even sure of the question. I must have been away when we did that. But I urge you not to be away for Critical Mass this Friday.
Posted Monday, March 22, 2010