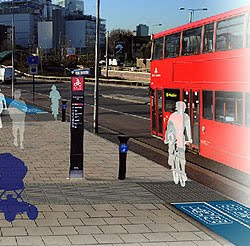 The Transport for London website has a nice new page with more details about the forthcoming Cycle Superhighways - the express cycle lanes which, it is confidently expected, will double the amount of cycle blogging in the capital.

The page indexes all 12 routes at a glance with their pretend start and finish dates. For the two routes opening this summer - Barking to Tower Gateway CS3, and Merton to Bank CS7 - there are also route maps and schedules of works. 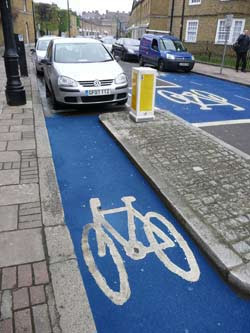 This is a more accurate impression (right) of how the routes will actually look.

The Superficial Cycleways are already a standing joke in cycling circles. But cycle campaigners are used to going round in circles.

It's not a particularly funny joke, though. Because there are many places where, we suspect, safety issues will be submerged beneath the B&Q emulsion. 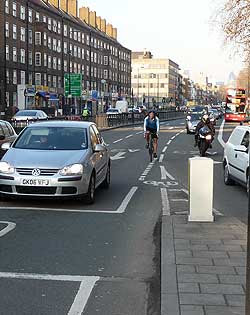 Take, for example, the junction on the right. The cyclist is going west along the A24/A3, Kennington Road, just passing the fork left to Brixton Road. (The Oval cricket ground is just a Eoin Morgan reverse-sweep away to the north.) He wants to go straight on, towards Stockwell.

And this is on Superficial Cycleway 3, Merton to Bank. So surely they'll sort it out, to make it 'safe and continuous'?

Maybe. Maybe not. The schedule notes provided on that TfL web page are unclear. All they talk about is "rearranging southbound traffic lanes... This will make it safer for cyclists".

Posting to the Lambeth Cyclists egroup about the "evil Oval", local cyclist Mark Knox said: "When some of us rode the route with the engineers and planners, we gave them all sorts of advice about this huge obstacle to easy cycling. One of our favoured options was restricting the left-turning Brixton/Camberwell-bound slip road to buses and cycles, and requiring all other traffic to carry on to the crossroads.

"What we stressed was that unless something radical was done to calm this junction, no route through it could be called a cycle superhighway. Sadly there is no mention of any measures to civilise the possibly even more perilous northbound straight-ahead journey through the junction."

Will such re-engineering happen? It's possible, just as it's possible that Lord Ashcroft might move in next door to us. But all we expect is a glossy strip of Dulux Caribbean Midnight. The great Cycle Superhighways Swindle. A bluewash.