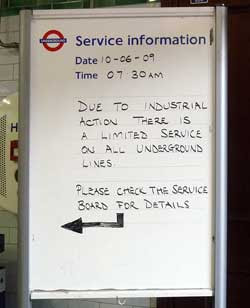 Ignore the Tube strikers or hate them, you certainly can't like them. Still, I guess it must be tough scraping by on barely twice what I earn, and doing a job that requires you to stay awake for much of the working day. If your view of the strikers is not entirely positive, you might be amused by a very sweary, and very funny, anti-strike spoof of the Jam's 'Going Underground' on YouTube.

In fact, not all Underground lines were out this morning: the Northern Line was running a limited service, which meant the guys handing out those pesky free newspapers were at least still in a job. 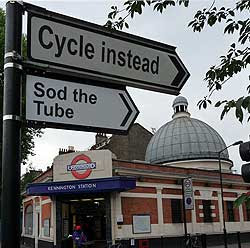 But there could be a bonus to the strike as another incentive for the potential cyclist to start biking to work. Various cycling groups were offering guided rides this morning into the centre of town. One, en route from Brixton to the City, passed virtually by our front door at 8.30am (below right), which was at least a reminder to get up. 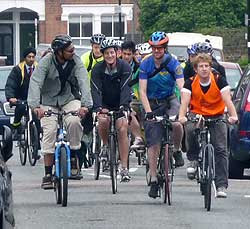 No doubt there'll be some irritatingly twee news items today featuring a wide-eyed reporter trying out a bike, as well as the inevitable cliches ('London's cyclists say on yer bike to the tube strike', etc). And I'm sure there will indeed be a small, but positive, lasting increase in the number of people cycling to work as a result. 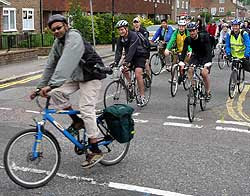 But let's not underestimate the sly opportunism of London's commuters. We asked a couple of regular local cyclists what effects they'd seen on cycling levels this morning. Er, um, actually, seems to be a bit less than usual, they said. Perhaps some of us are using the strike as an excuse to 'work from home', and catch up on all that iPlayer backlog...