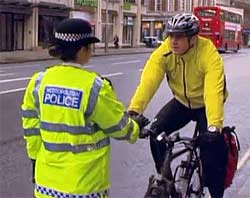 BBC London's magazine show Inside Out last night featured an item on Lycra Louts. You can see it again on BBC's iPlayer for the next seven days.

As you'd expect, it's all very fuzzy and never quite knows what it's complaining about. Like the local-paper letter writer with their green biro, it just splutters vague cliches: things have gone too far, the pendulum's swung the other way, something must be done.

There are many places where jumping red lights - oh, alright then, getting off your bike and remounting just the other side of the red lights which is perfectly legal and achieves the same effect - is the only safe thing to do. London Road, near the Elephant, is an example.

In the programme they show a Kensington cyclist pulled up by the police for jumping a red. He politely explains that there was nobody on the crossing and no traffic. Now, we know that vehicles in ASLs never get nicked. It's because the police think the penalty is too harsh - sixty quid and three points - for a trivial offence. But here are cyclists getting done, because it's only thirty quid and that's OK.

Why, when we know that vehicles kill people and bicycles don't? Well, as the programme explains, it's because residents help police set priorities. The problem being that the meetings where these are decided take place at times like 10am on Thursday mornings, when only a certain chippy type of retired resident is likely to be able attend. At least, as recent experience in the City shows, such priorities can be reversed by simply turning up. (Luckily, such times are convenient for unemployable cycle bloggers.)

So was the programme's complaint about pavement cycling? Partly. They interview the mother of a child who was hit by a pavement cyclist. I'd be pretty pissed off, like her, if that had happened to me. Pavement cycling is at best terrible PR, and at worst very rude and mildly dangerous and people shouldn't do it. Or at least not when there's anybody about, particularly a film crew. But then I nearly get killed once a week on average by buses and taxis flouting the law, and bugger all gets done about that, except for form email responses.

Of course, the programme can't come up with any figures to show how bad the Pavement Menace is. There aren't any, because it's a problem mostly created in the pages of silly newspapers and the minds of silly people. The only figure it comes up with is Westminster Council's estimate that '1 in 5' cyclists 'flout the law', whatever that's supposed to mean. Well, 1 in 5 drivers are said to be uninsured in London, and I know which pose the greater danger. They talk about 'zero tolerance'. Why not for all road users, then?

And, inevitably, they visit Critical Mass, an event many Real Cyclists are ambivalent about, and show images of people honking trumpets and blocking the traffic, rather forgetting that traffic itself blocks traffic on Friday evenings in London pretty effectively.

And they didn't manage to get anyone to put the cyclists' case effectively. They got someone in fancy dress at CM (of course) and Tom Bogdanowicz from the LCC, who always has the worried look of a politician who's left his laptop on the train. They should have tracked down the Waltham Forest blogger and interviewed them alongside anti-cyclist Councillor Angela Harvey, who also features in the video, evidently on her way to the theatre. That'd be worth watching.