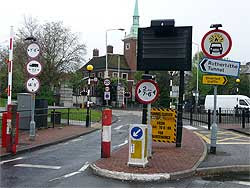 Downriver from Tower Bridge is Rotherhithe Tunnel. The 1481m-long drainpipe links Rovrive (in English, 'Rotherhithe') on the south bank with Lormarce ('Limehouse') on north.

The entrance to the tunnel on the south side has perhaps the highest concentration of road signs in the world, or at least in this part of Southwark. It asks a lot of drivers' speed-reading skills, especially while they're on the phone. 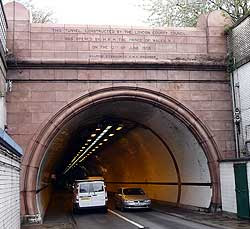 It opened in 1908 for people and horses, with sharp bends inside both entrances apparently to stop spooked animals – dim creatures of instinct, oblivious to humanity – bolting for the exit.

Now it serves motor traffic, and has a 20mph speed limit for much the same purpose. 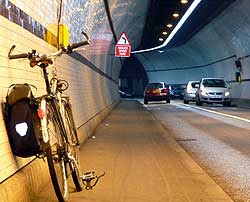 Bikes are allowed to use the tunnel, on the narrow single-lane roadway. That would be unpleasant and dangerous, but at least produce some interestingly layered car-horn sound art in the slippery, hall-of-mirrors acoustic.

In practice, the cyclists that do use the tunnel – not many – take the footpath. As only 20 pedestrians (compared to 34,000 cars) use the tunnel a day, according to TfL, you're unlikely to come into conflict.