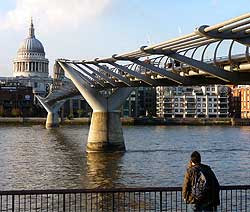 Downriver from Blackfriars Bridge is Millennium Bridge, aka the Wobbly Bridge.

It opened in June 2000 but turned out to be more of a cakewalk than a crossing: at the south end it was wobbling at 0.8Hz and in the middle at 1Hz. (Those with perfect pitch will recognise these as A flat and C, eight octaves below middle C).

The idea had been to provide a stylish link between Tate Modern and St Paul's Cathedral, not a fairground ride, so it was closed two days later. Spoilsport engineering work added dampers, and it reopened in 2002 vibration-free. 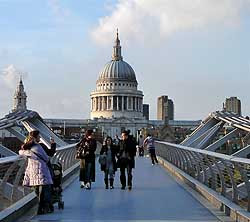 It's a pedestrian bridge, but fine for wheeling your bike across. (Though you can't easily lean your bike against the recessed strands of steel at the side.) And it was designed with views in mind: not only upriver and downriver, but along the bridge itself, especially as you walk up to it from Tate Modern, where it frames the dome of St Paul's very satisfyingly.

The best views of the bridge itself are from the bar up on level 7 of Tate Modern. Coming up here for a glass of wine at dusk ought to be in those books with titles like '1000 Things To Do Before You Start Forgetting Which You've Done'. 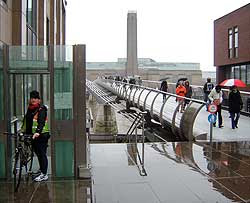 The north side takes you straight up to St Paul's. But if you want to go down to water level to walk along the riverside path, there's an inclinator: a curious little machine that's half lift, half cable car, and half shower cubicle, which will scoot you and bike up and down to avoid the steps.

From here on the north side it's a bit winding: down the inclinator, along the walkway, left up Broken Wharf, along High Timber St, right down Queenhithe to the walkway, through Fruiterer's Passage underneath Southwark Bridge, and left up Bell Wharf Lane to get back to road level. On the south side it's along the riverfront, right just after the Globe and back on yourself to street level. Either way, Southwark Bridge is under quarter of a mile away.