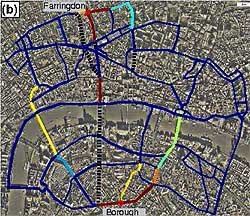 Lots of stuff on London's roads is paradoxical. Taxis furiously overtaking you ten metres before a red light. Drivers who moan that you shouldn't be on the road, but complain when you're on the pavement. Cycle lanes provided for your safety that disappear at the dangerous bits such as junctions. The one-way system north of Oxford St. It goes on.

But here's a real-life, mathematically supported paradox. Closing Blackfriars Bridge and its approach roads to traffic (the black-striped sections in the illustration on the right) would actually improve the overall traffic flow in London. That's the counter-intuitive suggestion in a 2008 paper by academics Hyejin Youn, Hawoong Jeong and Michael Gastner. 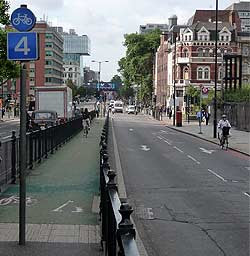 Their paper, The Price of Anarchy in Transportation Networks, looks at the traffic networks in London, Boston and New York. They propose from their data on traffic flows that Blackfriars Bridge Road (right) - wow, I never thought I'd see that appearing as a term in an equation - could be a real-life example of Braess's Paradox.

That's a theoretical situation where drivers, each choosing the most efficient route for themselves, actually don't produce the overall best solution for traffic flow - and that by closing off some of their options, you force them into a more optimal solution. 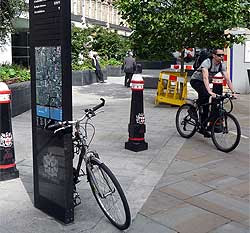 In fact, a tiny bit of part of the route they black-stripe out, St Bride St, is already peds-and-bikes only (right). 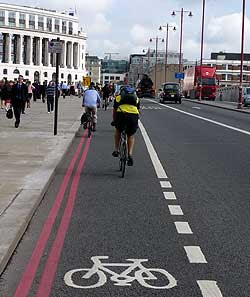 So let's do the thing properly and test the science! Close the road and turn it over to bikes! Then everyone's happy. Traffic flows better elsewhere, and we'd get a whole 3km-4km of gloriously wide, car-free bikes-only track, scything across central London. Not just the bridge (right), but the approach roads too would be ours. Motorists couldn't object because it would be SCIENTIFICALLY PROVED.

Boris, are you listening? That's what I'd call a Cycle Superhighway!