Good use for the Fourth Plinth: Make it bike parking 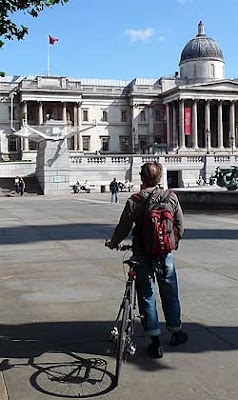 Trafalgar Square is a magnificent centrepiece to London, and so much better since they pedestrianised its top end, in front of the wonderful (and free) National Gallery. However, when it comes to the detail of bike parking, it's as hazy as a Monet Thamescape.

There's a handful of racks off its top right-hand corner opposite the National Portrait Gallery, but at peak times - such as yesterday evening, when we dropped into this year's (free) National Portrait Awards exhibition - these are full of bikes. As are the trees, the railings, the lamp-posts, and even the keep-left bollard. Yet there's plenty of pavement space that could be used for more racks, for example behind the new beam-me-up-Scotty entrance to St Martin-in-the-Fields's crypt. Bike parking is in outrageously short supply for such a visitable part of London.

But don't worry! Thanks to Antony Gormley's new artwork One and Other (right) the problems are solved. The work consists of members of the public, drawn by lot, occupying the empty fourth plinth for an hour at a time over the next few weeks. And no, I don't mean that by organising your slot right you might be able to take your bike up there with you.

No, the stroke of genius is that One and Other is so tedious you immediately want to cycle somewhere else. Most people simply don't have a clue what to do once they're up there except smile nervously and talk to their friends on the mobile; it's very poor entertainment. Give it a miss. A plinthcam runs 24-7 on Sky Arts TV channel, which is handy, because you can give it a miss on there more conveniently. ("This is a live webstream that may contain offensive content", it warns; replace 'offensive' with 'boring'.)

And if that doesn't work, Westminster could always try the sneaky 'bike parking' trick offered by the developers of a new student block for 850 Kings College residents on Denmark Hill, south London. Now, Southwark Cyclists recommends installing 130% cycle parking spaces for this kind of development, in other words just over 1,000 spaces. But Kings are only offering 250 spaces - most of which are, if you inspect their proposals, not bike parking at all, but tiny lockers 'for folding bikes'. Brilliant!
Posted Friday, July 10, 2009

Labels: bike parking, one and other, trafalgar square