Following yesterday's post, more map curiosities. Most of these have been culled from Internet sources. 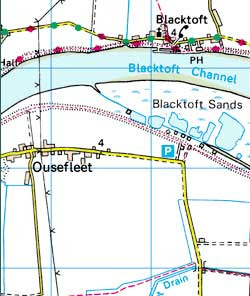 1. Ordnance Survey's Zen square
Ousefleet, a village north of Scunthorpe, on the south bank of the Humber not far from Trent Falls, is officially the dullest kilometre of all OS maps. It’s the nearest we have to a completely empty square in the entire UK map system, according to a computer search by the chaps at OS. All it contains is a single electricity pylon. There's a photo of the square at the Geograph project.

I did cycle here once to see what it's like. I couldn't see anything though.

2. Map making for dummies
Ever wondered what happens to crash-test dummies when they retire, if they survive all those impacts? They slip into parts of trial coding that the programmer forgot to update. Try a Multimap search on 'dummy2396' (map view, not OS view) and you'll see that it is now living in this caravan park in East Yorkshire. It's on Google maps too.

3. Welcome to Middle England
According to a Daily Mail article on the OS, the exact centre of mainland Britain (the point on which Great Britain would balance if you stuck it on a pencil) is SD 72321 36671. The precise centre is on an empty square metre of ground just off the A59, behind a sewage works near Whalley in Lancashire.

However, if it was the UK you were balancing, you'd have to move your pencil to Dunsop Bridge in the Forest of Bowland. If you were doing a Land's End-John o'Groats bike ride, you'd have to ride via here for the sake of symmetry.

4. Point furthest from a road in UK
According to the Ordnance Survey, the furthest point from a metalled road in Great Britain is on the hillside of Ruadh Stac Beag, between Letterewe Forest and Fisherfield Forest in Wester Ross, Highland, Scotland. The distance from here to the nearest road (A832) is 11 km (7 miles).
Posted Saturday, March 14, 2009