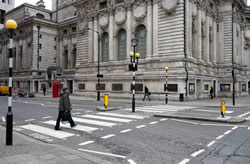 Another day, another route across central London into work. This time I went past the Houses of Parliament and Buckingham Palace, by Wellington Arch, and through Soho and Bloomsbury. I like the game of following the bike-route signs - to 'Euston', say - and then seeing where I actually end up when the route disappears into a back-street cul-de-sac.

As ever, there was lots to enjoy on the way. For instance, just off Parliament Square, at the junction of Tothill St and Storey's Gate, is officially Europe's Safest Pedestrian Crossing (right). Well, that's what the 'Eurotest consortium of motoring bodies' thinks, according to the BBC. Yes, I know. It just looks like a crossing. 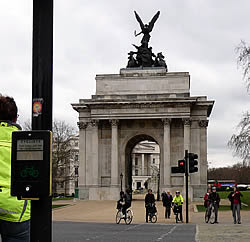 London's pedestrian crossings were in the news again yesterday. The mayor is proposing 'countdown crossings', which tell you how much time you have left to cross. At some crossings this may be used to cut down the time.

Cut down the time? Hmm. My route took me past Wellington Arch (right), where the cycle path grandly goes under the arch itself. Countdowns here would panic everyone except Dwain Chambers: you have a mere four seconds or so to cover the 25 yard (22m) crossing.

A horse might come in handy, which is presumably why this is also an equestrian crossing, complete with rider-height push buttons and horse-shaped green lights (right). 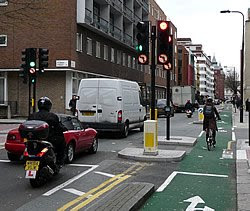 Finally, feeling like an adventure, I followed the separated bike lane west along Maple St, somewhere in the back lanes north of Oxford St. At the junction with Fitzroy St (right) the bike slot is excitingly situated on the wrong side of the road. That might put you in conflict with traffic turning right, so there's a separate traffic light for the bikes.

Except that when you press the button to request, you might have to wait two whole iterations of the other lights before you can proceed, forcing a wait of 90 seconds or so. Most cyclists, like the one in the picture, simply plough through the red.

On the other hand, if you had a countdown crossing here, you could do something useful during the wait, such as listen to a Wagner opera, or sit out the recession.