Oh no, not that Tavistock Place story again 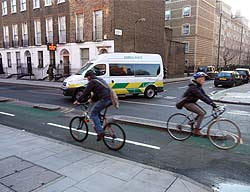 Tavistock Place's separate cycle lane is like visiting an ageing relative who always tells the same old stories. You spend ages trying to get through to them, then when you finally do, they won't let you go.

Getting on it, for example. My natural route is to join it from the south and turn right, the same direction as this van is turning in the photo. But thanks to it being a separated cycle lane, I have to cross not one, but three lines of traffic; to wait for a simultaneous gap in not two, but four lines. It's like waiting for planetary alignments. I end up coat-tailing a taxi and making the sort of nervous, promiscuous eye contact you get in a student disco.

Then after a couple of hundred metres I turn left. Except that the way the lights are phased, the traffic turns left first, across the cycle lanes (next photo). What you get is the mild chaos of the above student disco at chucking out time: some cyclists wait patiently; others jag out right to rejoin the car lane and turn left across the two cycle lanes, strictly adhering to the lights; others plough straight through regardless. 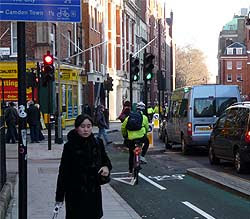 So this particular separated cycle lane, as I've banged on about before, only makes things worse in my opinion. As does every other particular example I can think of (such as the fiasco at Waterloo roundabout that plunges you into a bus-stop lagoon). Not only do they create problems at every interface with the rest of the traffic, they also suggest to drivers that cyclists 'ought to be' out of the way.

What I'd like to see more of is permeability, something of a current buzzword. More blotting paper streets, more capillary action, more ease and spontaneity and ability to use any combination of side roads and alleys. That means, essentially, making every one-way street two-way for cycles as of standard. The recent announcement that five City one-way streets will be made two-way for bikes as an experiment this summer is therefore a welcome first step, but a pitifully small and timid one.

As, no doubt, I'll cover in some future post... rather like that loquacious old relative. Nurse! Nurse! They've stolen my clothes!
Posted Friday, February 20, 2009