And was Jerusalem builded here? Yes, but without bike parking 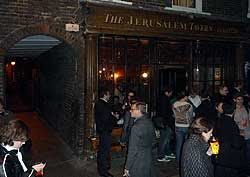 The Jerusalem Tavern, right in central London, is a splendid place for a pint. If you're looking for an authentic, woody, cosy, 18th-century pub that hasn't changed since it was built... well, this isn't it. But it's the closest you'll get. (All London's pubs were refurbished in the late 1800s and no old interiors survive, but this one is a genuine imitation, in a former coffee shop built in 1720.)

It serves very nice cask ale and it's usually packed and full of atmosphere. In fact, it's one of only a handful of central London pubs with the maximum five-pint rating on fancyapint.com (there are 17 in London overall).

And bike is the best way to go there, of course. But if you're looking for somewhere to park it, the closest you'll get is a couple of hundred yards away down the side passage, by St John's Gate. Because the Tavern's street offers parking for at least a dozen cars and a dozen motorbikes, but no cycle racks. There are plenty of railings, but all are adorned with notices banning bikes. (The fancyapint picture shows an unlocked bike outside. It wasn't there on our visit. Lesson.) 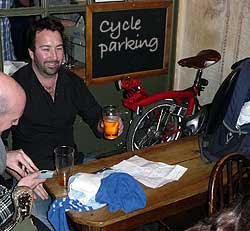 Still, you have two other options. One is to stand outside with your bike, as most people were on this mild November night, some even in T shirts who didn't come from Newcastle, and some not even smoking.

The other is to go by folding bike and take it inside with you, like this chap. Not sure about the ethics of taking up a seat in such a small pub though.

Anyway, we had a very pleasant evening planning ambitious bike trips. After a pint or two of St Peter's, Lisbon to Istanbul seems no problem. Probably more chance with our other bright idea: a cycle tour of all the fancyapint five-pint-rated London pubs. I think I'll do it on a Brompton though.
Posted Saturday, November 21, 2009