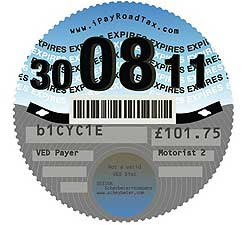 Two lung cancer sufferers are waiting for life-saving radiotherapy. One is a smoker and one a non-smoker. Which gets priority for treatment?

The right answer, of course, is 'neither: free health care is universal and non-prioritised (apologies to US readers), though if I was the doctor I'd be tempted to put the non-smoker first'. But what if the smoker claimed priority because the non-smoker 'doesn't pay hospital tax'?

Nonsense, you'd say: there's no such thing as 'hospital tax'. Oh yes there is, the smoker insists: all that tax I pay on cigarettes pays for the NHS, so the non-smoker has less claim to the treatment than me.

A smoker who claimed this would be held up for public ridicule and contempt. Yet it's exactly the same argument as the certain type of motorist who whinges that 'cyclists don't pay road tax so they should leave the roads to us'.

'Cyclists don't pay road tax' is an urban myth of astounding proportions. More widespread even than the notion that 1970s kids' TV programme Captain Pugwash had characters with very rude names (it didn't); that JFK mistakenly said 'I'm a jam doughnut' in Berlin (he didn't); or that Jeremy Clarkson once wrote something witty.

Now a site called ipayroadtax.com offers to sell you various bits of kit branded with a pretend logo saying that cyclists actually DO pay road tax, because most of us have cars. That's their logo on the right.

It was a wheeze that grew thanks to Twitter by the admirable cycling advocate and journo Carlton Reid (see his fine biking sites bikeforall.net and quickrelease.tv, and his Twitter feed).

Now, anything that might counter certain motorists' tedious and flatly untrue opinions about road funding and raise a bit of awareness is a good thing. If this promotes sensible media debate, and helps destroy this particular urban myth, then great.

But it's a wheeze I can't entirely participate in. I don't have a car, hardly earn enough to pay income tax, and get my T-shirts from East St market for a quid each branded 'Tomy Hifliger' and 'Docle & Gabanna'.

And in any case I'm not entirely clear what it's saying. That it's taxpayers who have the right to use the roads (which are paid for out of general taxation, and council tax, of course)? So not non-taxpayers, then? As a Southwark council-tax payer, do I have more right to use Southwark roads than Lambeth ones?

Maybe there's another answer - to charge cyclists a 'road tax' proportional to the wear and tear they produce compared to cars? The standard figure is that damage to roads is proportional to the fourth power of the axle weight. So a rough figure suggests that a car, which weighs about ten times as much as a cyclist (say 1000kg versus 100kg) should pay 10x10x10x10, or 10,000 times as much in 'road tax'. So if a car pays £100 a year, the cyclist pays 1p. I'd happily pay my next 50 years' 'road tax' now if it would shut up those certain motorists.

But we're getting dangerously close to the Smoker's Defence.

I think instead I'll make a T-shirt that says TAXATION IS IRRELEVANT, I'VE AS MUCH RIGHT TO THE ROAD AS YOU. IN FACT MORE, BECAUSE I HAVE RIGHT OF WAY WHEREAS MOTORISTS USE IT UNDER LICENCE.

No, that'd be too big a T-shirt. Maybe, instead, one that says CAPTAIN PUGWASH IS INNOCENT. Or JFK WAS RIGHT. Hmm. A bit oblique, I'll grant you. Ah, got it: how about 'SOD OFF'?.
Posted Wednesday, November 25, 2009