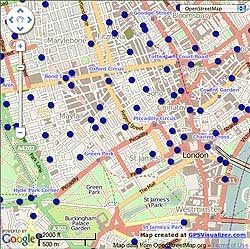 London's bike hire scheme will be rolling out this summer, and someone's knocked up an Open Street map with all the confirmed docking locations.

Such maps have been available for individual boroughs on council websites, but this - on the website of a company that's putting together a hire-bike-finding iPhone app - is perhaps the first publicly available to show all of them in one.

We're very pro the bike hire scheme, having seen it work with varying effectiveness in other major international cities such as Paris, Krakow and Copenhagen. And Cardiff.

We like it partly because it will offer even everyday, Real Cyclists like us new flexibility - organising trips with visiting friends, replacement-bikes for when ours are being repaired, or asymmetric journeys that involve peak-hour train trips. Partly because it will encourage potential cyclists onto the streets, who'll realise how rubbish the facilities are and might just make a fuss about it. And partly because the focus of popular discontent will wander away from 'lycra louts' to 'tourists on hire bikes' wobbling around on the wrong side of the road while taking pictures on their iPhone. 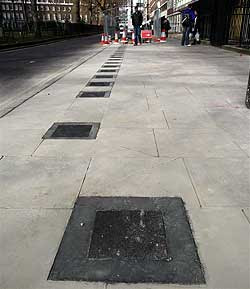 And there'll be a whole new subculture of Docking Station trivia-inspired trips to make, as there is with tube stations. What's the closest two docking stations? The most isolated one? The prettiest? Which ones generate the best free 30-minute journeys, with the most postcard views, the best riverscapes, the best mews to nose into, the best parks to explore, the quirkiest sights, the most stunning architecture? This blog will be making some suggestions.

For the moment, sights like this (right) are popping up all over the centre. After some surprisingly sandy digging for a few days behind Serco's rattly metal barriers, the black hopscotch-squares of the docking unit bases are revealed, waiting for the magic posts to be plugged in when the scheme starts. 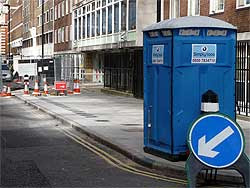 This one's on Cartwright Gardens, near the British Library, and if you ask me they should keep the plastic toilet cubicle as a feature of all bike hire stations. There's something about cycling that stimulates the bladder, and wandering round trying to find a central London toilet that also does bike parking can be a frustrating task. (Tip: Lincoln's Inn Fields.) Someone should do an iPhone app for that.
Posted Tuesday, March 23, 2010