Cycling images and misconceptions: What I think I do... etc 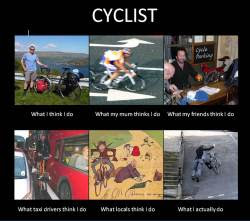 On Facebook right now there's a fad for posting up humorous photo-essays contrasting perceived and real images of people's jobs.

The joke is the contrast between What I Think I Do, What My Mum Thinks I Do, What I Really Do, etc, and the general misconceptions people have.

Well, here's my contribution. (The image links to a larger version.) Have a nice weekend.
Posted Friday, February 17, 2012 No comments: 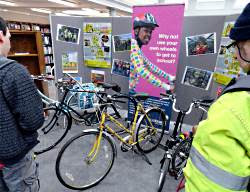 This week, York's library has an exhibition of bikes (right).

It's of interest to kids on half-term, and cycling bloggers with a similar mental age who also have nothing better to do. 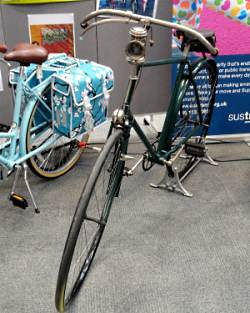 There's some interesting stuff in the small display, notably this 1890s Safety Bicycle (right), from a private collection.

No doubt the transport of choice for late-Victorian cycle couriers, dodging the Hansoms to deliver urgent packages of snuff in their bowler hats. 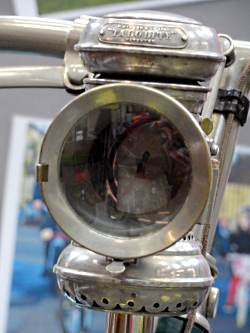 The bike also sports a state-of-the-art front light consisting of a candle (right)... 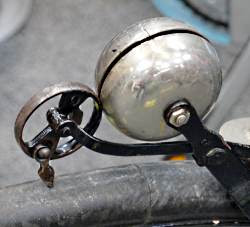 ...and a bell (right) that sits on the front tyre and rings all the time you are in motion.

That would shut up those cycletrack jaywalkers who complain in local newspapers about silent bikes approaching from behind. 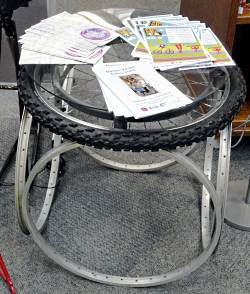 There's also a table made out of bicycle wheels (right) - I'd rather like one of these... 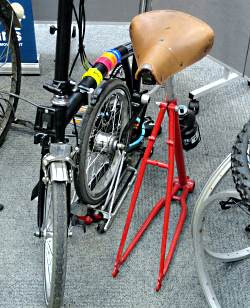 ...and a novelty seat made from a bike saddle and frame part (right).

Handy where space is a premium, or you have unexpected guests you don't want to stay long. 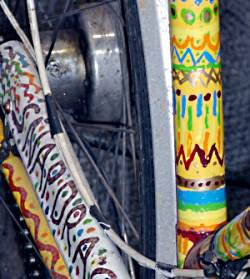 (You can typically pick up a preloved town bike, a Raleigh ten-speed perhaps, with three months' warranty, for eighty quid or so.) We like them.

Such rescue bikes don't all get intricate paint jobs like the one on display in the library (above right) but it certainly makes your bike distinctive.

Round the back of the display is a pinup gallery of kids' poems about their bikes.

"I love my bike, it makes me smile
I can cycle for almost a mile
It is shiny and pink
And it lives near the sink",

It's just crying out for a final, limerickish line, though. How about "Now I'm off to the pub for a while"? 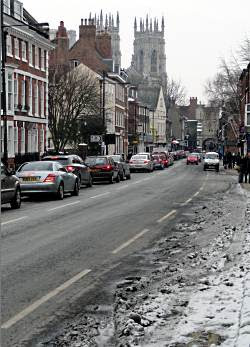 Unpleasant encounters with York's traffic are as rare as good estate agents. Car drivers are generally courteous and patient, and give cyclists good width. Just as well, given the number of cyclist swinging shopping bags from their handlebars.

But today's weather brought out the worst in some motorists. The problem seemed to be this (right, on Bootham): cycle lanes covered in ice and slush. Of course, you cycle further out, in the clearer and safer part of the carriageway.

Some drivers couldn't cope with this: we were hooted and mock-rammed twice by taxis, and once by a white van man. Not to mention nearly being doored by someone getting out of the pedestrian side in a queue.

The city's pavements, of course, have been covered in slippery ice for the last week. Which has at least meant no pavement cycling.

So stand by for green-ink letters in the local press moaning that cyclists are swanning around in the road, and should be back on the footway where they belong...
Posted Saturday, February 11, 2012 2 comments: 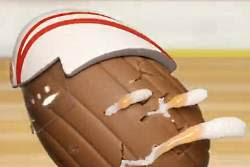 Yet more evidence here that the effectiveness of helmets in preventing injury is vastly overstated by the pro-helmet lobby.

This rider suffers serious head injuries during a race despite wearing a helmet.

It is possible, of course, that the helmet was already damaged, but the rider has made the cardinal mistake of not securing it properly - the straps are nowhere to be seen.

Whatever the case, though, the incident - which you can see in gory detail on YouTube - is clear evidence against those seeking to promote mandatory helmet use.
Posted Friday, February 10, 2012 No comments:

Best of Times, worst of Times: Safety campaign gets silly 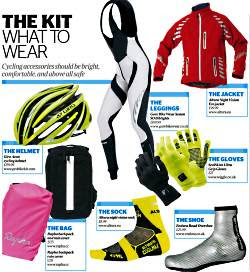 The Times’s campaign for safer cycling got rather silly on its third day.

Finger-wagging articles appeared telling us cycling is so incredibly dangerous, we need to take “body armour and helmets... Lycra and face masks”.

The Real Cyclist’s response to this is: tosh, balderdash, tummy-rubbish. We reject your London-salary, aggressive-urban-professional nonsense.

I cycle round York in my normal clothes (total cost £30 from Peacock’s). Backpacks are rubbish for everyday cycling; you want panniers. And the helmet, frankly, will make far less difference to your survival chances than cycling assertively and safely.

We should also, the paper instructs us, avoid all roads and only stick to cycle tracks. 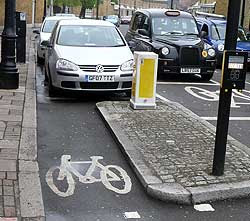 Er, right. Ones like this (right), near the Oval.

Don't be silly; most of them are full of broken glass, go the wrong way, and stop to let traffic past every two minutes; see this and other blogs passim.

Times hacks, why don’t you ask someone who actually knows, such as me? Except I’m not very good and will probably be off cycling somewhere anyway. So better, someone like Carlton Reid (who has contributed some lucid comments on the paper's campaign).

In other Times foolishness, rower James Cracknell wrote a piece full of opinion and devoid of any supporting evidence, saying those who do not wear helmets are being ‘selfish to your family and friends’.

That’ll be the entire population of the Netherlands and Denmark, then.

Here’s an idea: I don’t know anything about rowing, so maybe the Times could do an interview piece with me on what you must do to win Olympic medals.
Posted Monday, February 06, 2012 1 comment:

Blood and Thunder: The Times puts cycling safety firmly at top of agenda 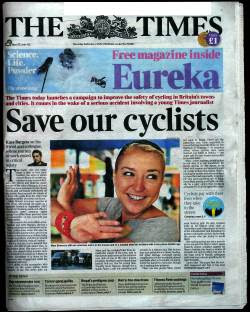 Yesterday's Times caused quite a stir by using its whole front page (right), and substantial amounts of space inside (below right), to launch their campaign to improve cycling safety.

It was prompted by the serious injury sustained by one of the Times journos, Mary Bowers, while cycling. She is still in a coma.

Today's issue has continued coverage of their campaign. 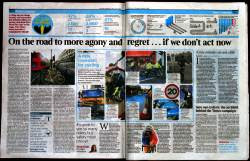 The eight points, briefly, are:
1 Mandatory sensors and safety equipment for trucks entering city centres
2 500 most dangerous junctions to be identified and fixed
3 National cycling safety audit to be done
4 2 per cent of Highway Agency budget earmarked for cycle routes
5 Cycle safety to be core part of driving test
6 20mph to be default speed limit in residential areas
7 Business invited to sponsor cycleways, as in the Barclays Cycle Superhighways
8 Every city to appoint a cycle commissioner to push reforms 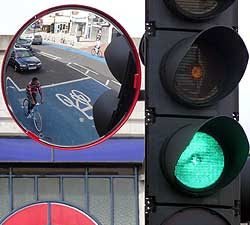 Some aspects of the Times's proposals are open to debate. I'm not sure about point 2's suggestion of 'Trixi mirrors' (right) as a matter of course, for instance (there's no evidence either way on their effectiveness yet, and we can't afford to splash money on unverified measures).

The idea of London's Cycle Superhighways as some sort of best-practice model is arguable, too.

But the fact that a major newspaper has put cycle safety so firmly on the national agenda is excellent, if overdue, news.

I'll be in more of a joke-cracking mood next post, but this is serious stuff.

However, there was one subbing error that made me smile in the Times's 'Covenant for Cycling', in point 1: "Trucks entering a city centre should be required by law to fit censors"...

It does make you wonder what those naughty truck drivers get up to in their cabs to need such moral scrutiny.