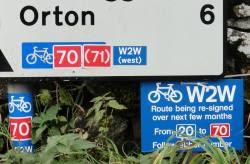 I've just come back from doing the very enjoyable Walney to Wear coast to coast cycle route (W2W) - one of the Sustrans suite of Irish-to-North-Sea cycle routes. (It was for an article for an upcoming issue of the CTC magazine, in case you're from HMRC and wondering why I'm claiming all that cake and beer against tax.)

The W2W goes from Barrow to either Whitby or Sunderland - splitting, much as my saddle did, just outside Barnard Castle.

It's a more strenuous traverse than 'the' coast to coast, the C2C (Workington/Whitehaven to Newcastle/Sunderland). The W2W involves around 150 miles, vaulting over some lofty Pennine highlands, and probably three days.

Day 1 was Barrow to Kendal, about 45 miles. Barrow is Britain's most working class place. This is based on metrics such as density of betting shops, fish and chip takeaways and tattoo parlours, in which case my home street in York must give it a run for its money. 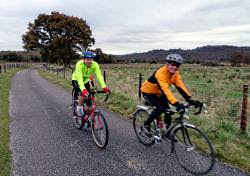 The scenery here is rolling south-of-Lakes hills and some flatlands (picture). At friendly Ulverston you can see a statue of Laurel and Hardy - Stan being a local boy - who weren't cyclists, but whose example of well-meaning but hilarious incompetence informs most of Britain's cycle infrastructure. 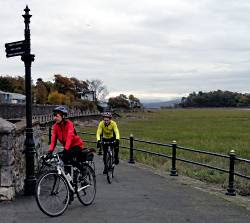 Highlights include Grange-over-Sands's extraordinary promenade (picture). Rather than overlook gunmetal waters, it now fronts meadows of invasive grass munched by sheep. (I suspect there's no cycling, despite what these people thought.) 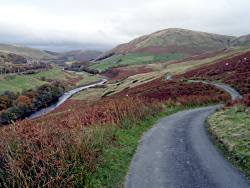 Day 2 was Kendal to Barnard Castle, about 55 miles. This was a tough day of headwinds (unusually: the prevailing direction is westerly) and sharp climbs, but also superb autumn scenery along the Lune Valley and the Howgills (picture) in shades varying from red to golden yellow to deep green, rather like my face. 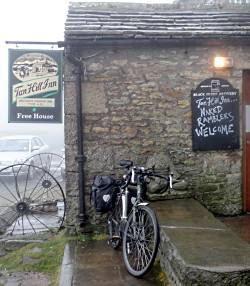 The climax of the day, and the route, is at Tan Hill Inn (picture), Britain's highest at 1732 feet (or, in metres, erm, quite a lot) up on a remote Pennine hill. On a clear day you can see both Irish and North Sea coasts. On a day like the one I was there, you can't even see both sides of the car park. It was drizzly, cold and misty, with zero visibility. I could just, however, make out the sign that said 'Naked Ramblers Welcome'. 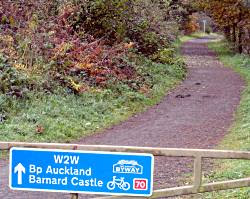 Day 3 was Barnard Castle to Sunderland, about 60 miles. Much easier in terms of hills - and with many miles of flat but spattery railtrail (picture) - this was still a trial thanks to the headwinds.

The worst challenge, though, was following the Sustrans signage into Durham (a convoluted route evidently modelled on the decay trail of a Higgs Boson) and out of it (I lost it completely, in every sense, especially when I realised I'd come in a circle back into the centre). So this sign was pretty appropriate (picture). 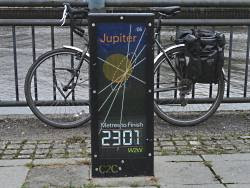 The final riverside run in central Sunderland takes you past artworks representing the planets (picture), similar to York's Planets Trail, though obviously not as good, as this is not Yorkshire. 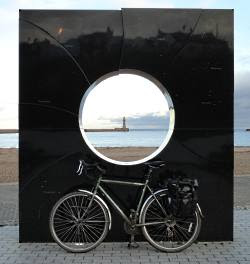 The grand finale is the ride out along Roker Pier (picture), and the commemorative picture of your bike at this fine monument. Then some commemorative drinks at Wetherspoon's waiting for your train home.

Advice for the trip: it's rough in places, but nothing you can't enjoy; take your time; and you get best results if you drink plenty of fluids. Funnily enough, the same goes for the Wetherspoons. 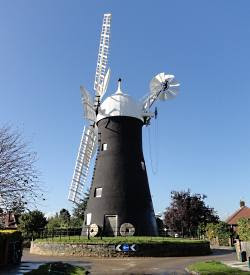 York's Holgate Mill 'roundabout' (all pictures; see map) has been chosen as the top gyratory in the UK by the prestigious UKRAS (UK Roundabout Appreciation Society). Their 2013 calendar features it on the front cover.

After the good news making the York Press yesterday, the mainstream media has picked up on it, and when I arrived this morning, there was a camera crew doing a feature for Look North tonight.

Well, I say 'crew'. It was one bloke doing camera, sound, interviewing and direction. In TV school they call this versatility. In TV itself they call it economy. 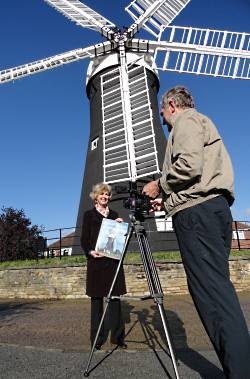 Anyway, after his interview with tourismo tsarina Gillian Cruddas (right), the multitasking camera guy borrowed my bike to get footage riding round the thing itself (bottom right).

He then videoed me doing the same, so you may briefly glimpse me in the feature tonight. 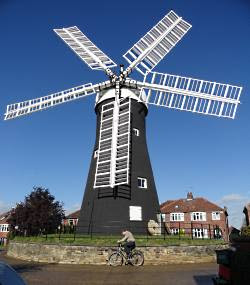 And I say 'roundabout'. It's not a real roundabout as it doesn't serve a junction; it's just a doughnut-shaped episode of a residential through-street - Windmill Rise, about half a mile south of the station - that happens to enclose a rather nice restored mill, landed Tardis-like amid a housing estate.

But it did look quirkily attractive (right) in today's crisp autumn sunshine.

Much in the same way as I didn't, following my recent grapple with a feisty Bradford curry. 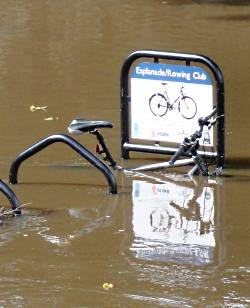 York's great flood - the biggest since 2000 - topped out at 5m above normal on Wednesday last week.

It wasn't the best time to realise you'd left a bike locked to the riverside racks by Lendal Bridge (picture). 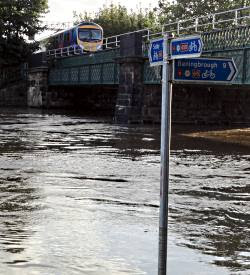 Or to attempt to cycle the riverside path north out of the city (picture) without a wetsuit. 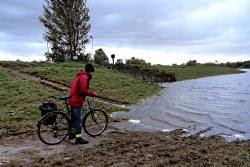 But now, over a week on - even though the river has dropped to near normal levels - many surrounding areas are still under water. The low-lying meadows north of the city are huge water tanks, storing up potential flood water until it can be safely flushed down the Ouse. 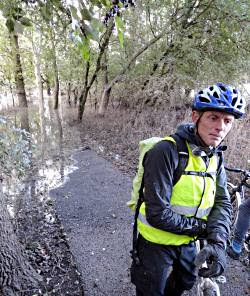 York's outskirts are more like the Everglades. Here's the riverside path (picture) just north of Skelton, a couple of miles from the centre, last Thursday.

This particular bike ride decided not to go any further; anyway, one of the group said they were allergic to fish. 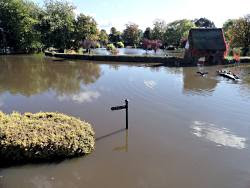 And this (picture) is Rowntree Park this morning, transformed into a giant lake, a little bit of Florida in East Yorkshire.

There's No Cycling in the park, though local custom is to ignore it. Nobody was cycling today, though.

So perhaps York's city centre Pavement Cycling problem will resolve itself soon, thanks to global warming: those low-lying footways will simply be too flooded too often to bother cycling on.