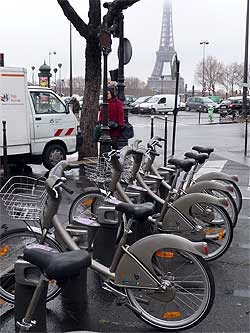 I've just been in Paris for a couple of days. I'm very interested in visual art, and I certainly got the authentic French experience: standing outside art galleries which had been closed thanks to a public sector strike. Groups of young Parisians were standing around outside smoking and answering every question with a shrug. They were the pickets.

A very nice young lady from the Guardian interviewed me at the Louvre. I don't think she can have been in the job long, because she spelt my name correctly and got the quote right.

But at least I could shuttle between the inactive museums quickly and conveniently, thanks to the famous Paris bike-hire scheme, Velib'.

It really is a good system. Signing up for a day pass is quick and easy: you can do it online, or just at one of the terminals at every docking station (above right). You spend two minutes prodding the screen with a frown before you realise you should be pressing buttons on the numerical keypad below, but then all you need is a bank card and a few seconds.

A day-pass costs a token one euro (and you authorise a 150 euro deposit, but it's not taken from your account unless the bike is, say, stolen by a striking art gallery worker escaping the tourist mob). Then you can take a bike for free for up to half an hour, returning it to any of the very numerous docking stations across the centre. 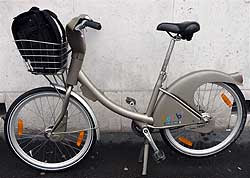 The bikes (right) are chunky, solid, one-size-fits-all, with three hub gears. There are chain guards to protect those stylish Gallic trousers, and lights that stay on all the time, Volvo-like, some strobing nervously like a warning light. They're pretty front-heavy, especially if you plonk a daypack full of one-euro plonk in the front basket, but they run smoothly and are a pleasant ride.

Once you get the hang of it, like going on strike in the French public sector I imagine, you want to do it all the time. It's easy: you can take out and return a Velib' bike at the drop of a dog turd. (It's true what they say about French dog owners - a good reason not to cycle on the pavement. Or walk on one.)

To take one out, all you need is to key in your daypass subscriber number and a four-digit PIN of your choosing, and select your bike. To return it, you don't have to key in anything - you just slide your bike into a docking post where a bracket engages and a green light shows that it's safely docked. Yesterday I did seven journeys, all of them free. 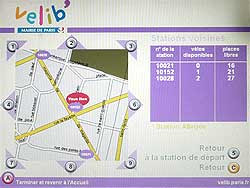 The multilingual terminals at docking stations show locations of nearby stations, and show how many bikes and vacant posts are available (right). 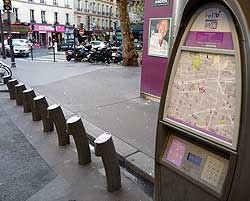 This is valuable advance info: you can find some docking stations empty, with no bikes to be had (right), especially around popular start-points such as a rail terminus. 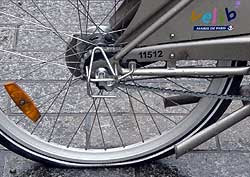 Even if there are bikes, you might find some are out of action through punctures (right) or other problems. Their posts show this with a red instead of green light, and the system knows they're en panne and won't let you take them out. Outside the Gare du Nord, one docking station had six bikes, five of which were unusable. There seems to be an additional informal system where duff bikes are left with their saddles the wrong way round as a kind of long-range-visible warning. 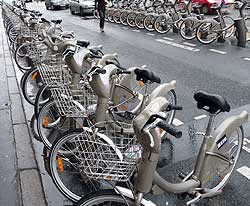 Conversely, some popular destination docking stations might be full of bikes (right) and have nowhere to dock your bike back into.

And, of course, the scheme's appetite for bikes - which get abused, trashed or stolen - is legendary. Each of the 21,000 bikes has been replaced already. 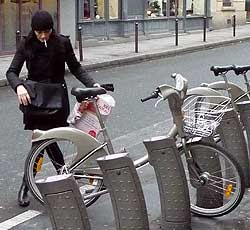 Navigating Paris's one-way system isn't always easy, and you often find your nice separated bike lanes suddenly throw you out onto a cobbled traffic bedlam. But it's great fun, a delightful way of getting from A to B to C-cedilla, a genuine must-do, and is popular with locals (right: she must be one). Every other cyclist you see is on a Velib' machine.

Just hope that, when you go, the public sector workers running Velib's electronic system aren't on strike instead. Otherwise you might have to spend all afternoon footslogging the Louvre's vast corridors. There's somewhere that could do with bikes to get around.