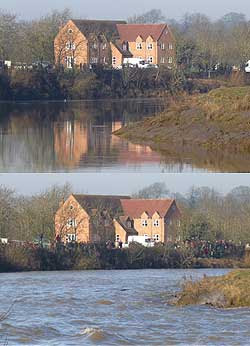 It was the year's only five-star Severn Bore yesterday, a remarkable natural phenomenon that's ideally visited by bike.

The bore is a tsunami-like wave caused by particularly high incoming tides being funnelled up the narrows just south of Gloucester. Like a 168 bus overtaking you too close north of the Elephant and Castle, it roars in without warning out of nowhere. It raises the river level in seconds (the two images on the right were taken about 20 seconds apart) and reverses its flow.

If you're standing on the riverbank you may well be soaked in water as the bore splashes past, like a 133 bus overtaking you too close south of Kennington Station by that enormous puddle that always collects after rain.

The BBC video of the Bore (right), shot on Monday morning, shows exactly the experience I had from the same spot, Stonebench, on Tuesday morning. Except it doesn't show my bike being drenched. A bike which now has a peppergrinder for a chain.

Four- and five-star Severn Bores (the ones big enough to be worth seeing) are a quirky and infrequent curiosity, rather like a lunar eclipse, or a driver actually waving thanks when you stop to let them go past. 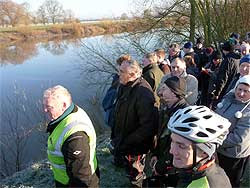 There's a sense of occasion and friendly banter among the crowds of spectators, a mix of ex-military, retired-to-the-country couples, outdoorsy types, chatty locals, and cyclists - probably the only people not wearing wellies.

And by bike is the best way to see the bores - this was another chapter that almost made it into my 50 Quirky Bike Rides book - because: 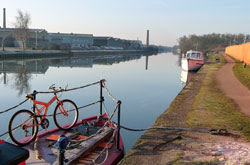 • Four- and five- star bores can be predicted to the date and within a few minutes months in advance, so you can book ultra-cheap trains (eg London to Gloucester £9 one-way with bike) and accommodation (eg £19 room for two at Gloucester Travelodge, right in the centre). 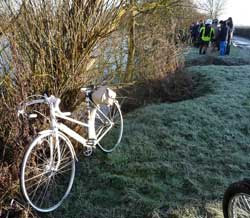 • Two of the three best viewing places are best visited by bike (no car parking, congested narrow roads, no public transport). (1) Stonebench (right) is three miles or 15 minutes southwest from central Gloucester, almost all traffic-free, along the towpath of the Gloucester and Sharpness Canal (above right, National Cycle Route 41/45). 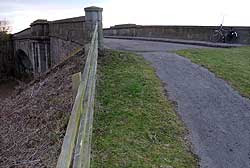 • (2) Over Bridge (right), a disused crossing built by Telford, is one mile or 10 minutes northwest of central Gloucester along a cycle path alongside a dual carriageway (National Cycle Route X). See OS Map (Stonebench is towards bottom left; Over Bridge is marked as 'Telford Bridge') 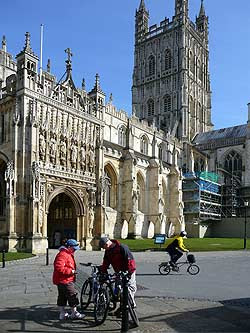 • You can explore Gloucester (Cathedral bottom right, or the medieval galleried New Inn) and surroundings by bike and encounter things you don't in London: deserted night-time town centres, or strangers chatting to you without asking for spare change, for instance.

The Severn Bore website and Environment Agency website have details on bore ratings, dates and times, and viewing locations. The best Severn Bore for the rest of the year is on the morning of Wed 31 Mar.

(England's other tidal bore is the Aegir, on the Trent - the EA website has details. It's less spectacular than the Severn's, but maybe worth a trip to Gainsborough and a leisurely cycle along the riverside roads. In Lincolnshire, most things are leisurely.)