Jersey's helmet law does my brain in 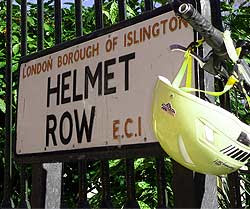 Oh. Helmets have been made compulsory for under-18s in Jersey, that famously progressive island-peculiar. Jersey likes to style itself a cycling island. This will do nothing for that image. Freewheeler watched the predictably uninformed BBC TV news item on the new law yesterday morning.

The bill was brought in by a politician who had the heartbreaking experience of seeing his son suffer brain injury after falling off his bike. Very sad, but that's not a good reason to make laws.

Still, it gives me an idea. We're always hearing from people with an unprovable anecdote about how a helmet saved their life, so therefore they should be able to tell everyone else what to do. (However, they usually didn't escape as unscathed as they think: their ability to type upper-case letters and write coherent sentences often appears to have been compromised by the trauma.)

Well, my granddad was saved in the Great War when a sniper's bullet was deflected by his cigarette case. So I'm going to campaign for smoking to be made compulsory. 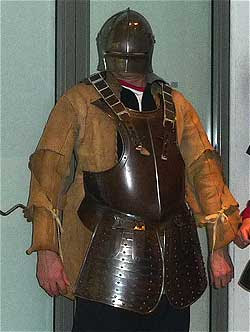 Regular readers will know from previous posts (1, 2) where I stand on helmets. Right on the top of them, to tread them as far into the ground as possible. They're of very questionable effectiveness and largely irrelevant to the Safety Debate, merely drawing attention away from the real issues, such as how we persuade the public and politicians to invest money and willpower into better cycling facilities.

Still, I have a tip for those who believe better personal protection is the way forward rather than better bike lanes, and that it's the victim's responsibility for any accident. Nip up to the excellent Wallace Collection, just north of Oxford St. (It's free, and they have good bike parking now.) In their basement, you can try on a suit of armour (picture).

It's great fun, and you can see how much more you'd enjoy riding round London, and how much safer everyone would be, if only they'd make it compulsory for cyclists.
Posted Tuesday, March 16, 2010