LCN Route 2? It's a jungle down there 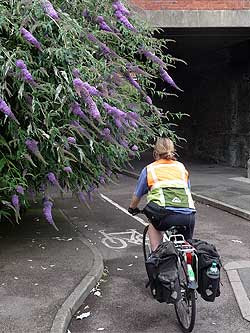 London is a surprisingly green city, especially if you view it vertically from Google Earth.

Or indeed horizontally from LCN Route 2, such as here in south London (right), somewhere in a place called 'Ba-man-zee'.

We don't know exactly where in Ba-man-zee because we got lost in the undergrowth. Fortunately we met some friendly natives on a hunting expedition for 'ba-ba-kyu', evidently a local type of bushmeat.

We were able to communicate in creole, pidgin, mime and gesture to find a source of clean water (which they called 'nyu-zay-jant') and a route back to civilisation. 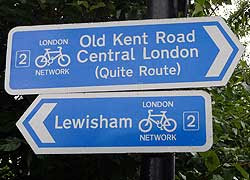 As the sign promises, it is Quite a Route.

(Added Monday 13 July: Undergrowth cycling is clearly the in-thing this summer, to judge by Freewheeler's similar experiences in other far-flung parts. Perhaps TfL should put out a press release trumpeting this 100% rise in cycling levels on trans-foliage routes.)
Posted Sunday, July 12, 2009