Bus vs bike? One loser, one winner 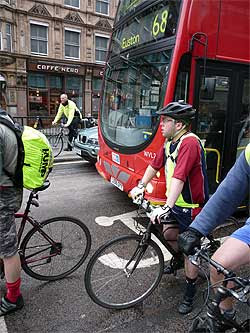 Bikes are the fastest way to get across cities, especially central London. We all know that.

It causes problems at rendezvous with friends who are taking public transport though. Invariably I'm ten minutes early and they're half an hour late.

Which makes me look the no-mates drinking by himself at the bar. Or the restaurant loser stood up by an internet date. Or the middle-aged newlywed whose Russian bride has yet to return from picking up her new British passport.

Anyway, yesterday we performed an accidental bus/cycle comparison. Two of us took a parallel journey from the Elephant and Castle to the top of Regent St at rush hour, setting off at the same time (8.33am), taking identical routes (over Westminster Bridge and past Trafalgar Square).

Of course, the bike won comfortably: I arrived at 8.47am, my colleague at 9.05am. The bike journey, in other words, took less than half the time (14 versus 32 minutes).

The cost difference is also dramatic. The bus journey was a peak-time Oyster card charge of £1*. The bike expense on the day was nothing. Plus six quid for a coffee and sandwich while I kicked my heels waiting for them.

Still, I did my good deed for the day while I did so, explaining to a young Russian woman how to get to Heathrow. She seemed in quite a hurry.