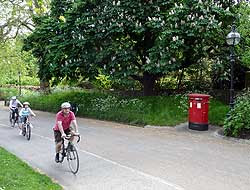 BBC presenter Jeremy Vine, PA reported yesterday, was ticked off by a policewoman for cycling in "a London park" while out on a family picnic.

Hmm. But which park? Perhaps PA aren't aware that London has several. The big central ones only allow bikes on restricted parts of their pathway systems, but they're still a biking delight. Hyde (pictures), Green and St James's Park have well-marked bike paths that let you cycle almost continuously from Notting Hill or the Albert Hall past Buckingham Palace to the Houses of Parliament and Trafalgar Square. And maybe, just maybe, things are moving our way: Regents Park, which notoriously banned bikes completely until recently, is currently undergoing a trial to allow bikes to use part of it. 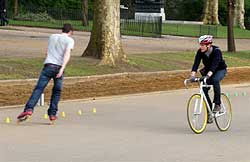 So hooray for Southwark, which allows cycling in all its parks, so long as you do so responsibly. Mr Vine can trundle round Ruskin or Southwark or Burgess or Dulwich or any of the other borough parks with his family, free from jobsworth molestation. Or hazily-reported news stories.
Posted Tuesday, July 28, 2009