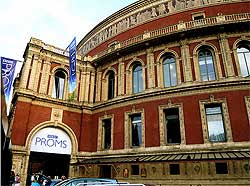 The Proms start today. Every evening between now and Sat 12 Sep there's a world-class orchestral concert at the Albert Hall (right, pic from londonconstant) for five quid.

The Proms experience is best enjoyed by bike. (There are bike racks behind the Hall by the top of the steps where you queue, or near the bottom of the steps across the road.) Gliding home through Hyde Park on a warm summer evening, past Buckingham Palace and Big Ben, with a Shostakovich symphony in your head battling the police sirens, is unforgettable.

A prom concert is one of those unique London experiences, like sitting on a train next to a minor celebrity whose mobile phone conversations turn out to be utterly dull. Or enjoying the amazing view from Tate Modern bar of St Paul's and the riverscape and of your bike being nicked. Or getting stuck in a Parliament Square jam thanks to a mob protesting about somewhere you've never heard of. OK, so it's rather more fun than those. 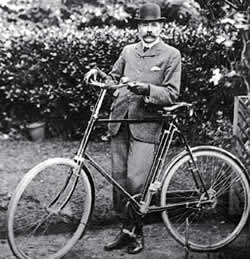 Anyway, the First Night tonight includes Elgar's In the South. The great English composer was a very keen cyclist (right), from taking it up at the age of 43 in 1900 to about 1909, when his wife Alice insisted on going everywhere by car instead. Many might know the feeling. There's a whole book about the composer's cycling exploits: Kevin Allen's Elgar the Cyclist (Aldine Press 1997, ISBN 0 9531227 0 0).

In his cycling decade Elgar cycled thousands of miles touring the countryside round his Malvern home. His cycling maps are criss-crossed with dense red lines plotting the routes he took. His visionary masterpiece Dream of Gerontius was evidently composed on the saddle; it's a powerful near-death experience, which suggests he knew a thing or two about cycling on fast rural roads.
Posted Friday, July 17, 2009