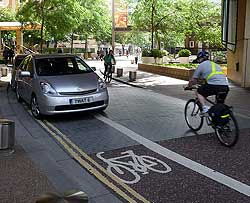 Upper Ground is a handy back road just south of the river. It's one way westwards for cars, but a contraflow bike lane lets you whizz eastwards from the South Bank to Blackfriars Bridge Road.

Except that it doesn't, because of the cabs waiting for their clients outside a posh hotel. They block the bike lane and force us out into the traffic flow coming the other way. 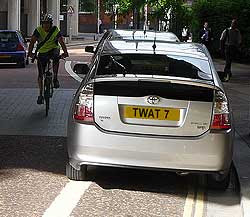 I had to jag out so suddenly that I almost spilt some of the carpet tacks I happened to be carrying. Phew. Good job I didn't! I'd hate to lose them, because the police would never be able to find me to return them, especially as they had no fingerprints on them because of the thin plastic gloves I had on. Not to mention that broken glass I was taking to the recycling point.

Anyway, by the usual remarkable coincidence, their number plate tells us everything we need to know about driver. And no doubt passenger.
Posted Saturday, July 25, 2009