Cycle to the moon: One small step 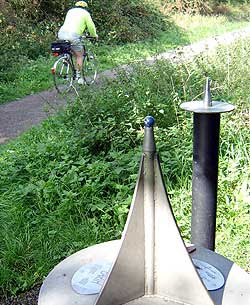 It's 40 years today since Neil Armstrong's historic 'small step': the first time ever that man had experienced an autocue failure on another world.

As yesterday's post illustrated, later Apollo missions took a vehicle, but no bike, which was a bit car-supremacist. Or maybe the space reserved for the lunar cycle on the Lander was already occupied by a pushchair and someone's holiday suitcase.

The nearest you can get to cycling the moon is in York, on the railtrail to Selby. There's a 10km-long model of the solar system with the sun and all the planets at a scale of 1 in 575 million - more details, and a Google map, in my post of 24 Jan 2009.

The earth-moon system (right) is near the York end of the trail, not far from the racecourse and the chocolate factory, which some members of your cycling party may be more interested in than astronomical facsimiles. 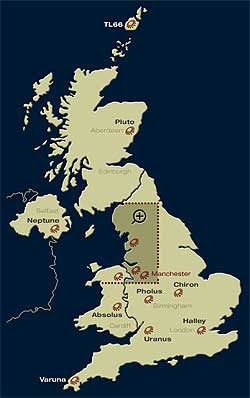 If you collect all the planets on the York-Selby trail, you might want to move up to the entire solar system. Jodrell Bank, in Cheshire, is overseeing a similar project called Spaced Out (right). This one’s large scale, at a comparatively streetmap-like 1 in 15 million, and will thus stretch over the whole of the UK. An enormous red-and-yellow striped acrylic sun is at Jodrell Bank; the Earth is already in Macclesfield; Neptune is under construction in Armagh; Pluto will be somewhere in Aberdeen. A frozen, lifeless, distant, mysterious world that has baffled scientists ever since its chance discovery, Aberdeen is therefore an appropriate place to put Pluto in.

Spaced Out also includes models of asteroids, comets (such as Halley’s, which will be at a school in London) and Trans-Neptunian Objects (such as Varuna, a shiny steel sphere roaming the outer reaches of the solar system in Cornwall; and something called TL66 that will one day be wandering among the ponies in the Shetlands).

On the other hand, maybe the easiest way to cycle to the moon is to find a pub of that name. Or half of it, anyway.
Posted Monday, July 20, 2009