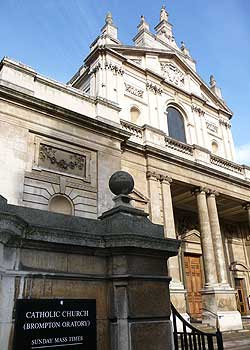 Cycled past the Brompton Oratory (right) this morning, the splendid Catholic church in West London which somehow gave its name to the folding bike.

There's a statue of the much-venerated figure of Cardinal Newman adorning the church, so why not of the Brompton's much-venerated designer Andrew Ritchie, patron saint* of the ingenious folding personal transport solution, who used to live just opposite in the bike's early days.

According to the church's website, the name 'Brompton Oratory' is incorrect, though that's exactly what the sign outside calls it. They maintain its correct name is the Church of the Immaculate Heart of Mary, but I wouldn't have been so keen on a bike called 'Mary'.

We'd been having an inline skating lesson with Mike van Erp, who's great fun and a brilliant teacher, and being a very active cyclist (whose bike-cam videos of bad drivers appear on YouTube) is obviously the right sort of chap. I only fell over when I laughed. Quite often, then. 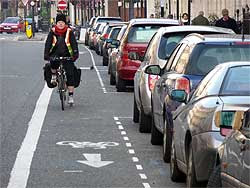 We explored the back streets of posh West London on our way home. Down Ebury St (Google map below) is a contraflow cycle lane in a one-way street that's a bit like those cures that are worse than the disease.

The lane (right) forces you to ride right alongside the line of parked cars. One hastily opened door and the best you can hope for is a nice memorial at Brompton Oratory. Unless you ride out a safe distance from the parked cars, in which case you're staring down the barrel of the traffic gunning the other way.

But the lane isn't completely useless: on our visit, it was reassuring to see that the cycle lane did serve a useful purpose, as a taxi park.

* Of course, the patron saint of the bicycle is in fact the Madonna del Ghisallo. I'll try to remember that next time I have a bike nicked.
Posted Saturday, January 31, 2009