Cycle parking done by the book 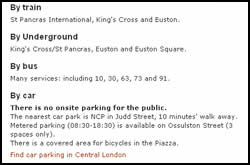 I'm working at the British Library at the moment. Between Christmas and New Year I was the only person in from the massive London web team. (The other two were on holiday, in raw third-world places such as Kenya and Newcastle.)

It was tempting. I could do a global find-and-replace across the whole British Library website, changing every occurrence of 'the' to 'the bloody'. I could make the front page redirect to my Facebook profile. I could change the banner for Online Gallery to read 'Liverpool are rubbish ha ha Ryan'.

Of course I didn't. However, I did mildly abuse my position by making a change on our 'how to get here' page. This gave brief details of access 'By train' and 'By Underground', but oddly puts the mention of bike parking inside the 'By car' slot (above right). 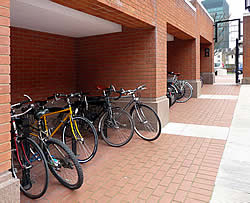 This is clearly intolerable, because like any normal single-issue weirdo, I judge an organisation by how much cycle parking it has, and the simple matter of whether the website includes cyclists. (BAD: London Eye; Madam Tussaud. OK: National Theatre; Tate Modern.)

So I corrected the page, even though I'm really only supposed to do the Taking Liberties website. I made a new section 'By bicycle'; and I bigged up the cycle parking (because it is good - see photos above right and bottom right - even if that side gate in Ossulston St by the covered Sheffield racks is usually mysteriously closed).

And I included a link to Transport for London's journey planner for London, which can provide you detailed cycle routes between any points across the capital. I'll do a bigger review of it a bit later when I've had more chance to evaluate its idiosyncrasies. Put in 'British Library' as your destination, for example, and it directs you to the staff entrance, the wrong way up a one-way street. 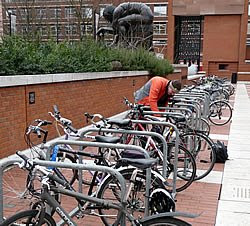 But then, it also directs me out of my house the wrong way up a one-way street, too; perhaps it's just reflecting what it thinks most cyclists do anyway.

Anyway, that new bike-friendly how-to-get-to-the-Library page is now up. (GOOD: British Library.) Do try the TfL journey planner in cycle mode and tell me what you think.

And see if you can find the parts of the website where I've substituted the phrase 'our collection of north German 15th-century incunabula' with the words 'a load of old kraut books'.