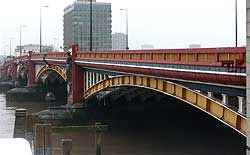 Downriver from Chelsea Bridge is the 1906 steel-arch structure of Vauxhall Bridge. Cross over the wide, fast cement savannah and you might think it's central London's most boring crossing. 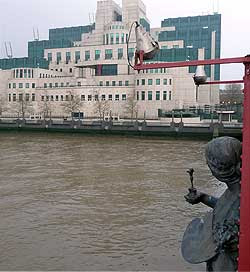 But of course you're on a bike, not in a car or on a bus, so you can stop to look over the side. If you do, you'll see all sorts of quirky stuff.

And we don't just mean the Pink Floyd view of Battersea Power Station's dead sheep to the west, Tate Britain on the north bank, the Eye and other postcard-London goodies downriver, or the Stalinist-cake architecture of the SIS (aka MI5, MI6) building at the south end (right).

No. We're talking about the eight large female figures depicting the arts and sciences that adorn the upstream and downstream sides of the bridge. They're all flowing art-nouveauish graces that could be advertising a safety bicycle in a 1900s-Paris poster by Mucha. 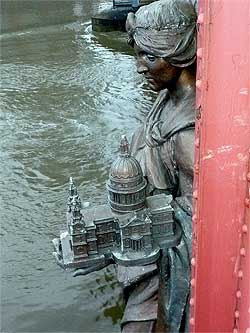 But the best one is Miss Architecture 1906, who holds a model of St Paul's Cathedral (right). There must be some sort of pub-quiz-question you can ask here, such as, 'From which bridge can you photograph both the MI6 building and St Paul's Cathedral?', or, 'Why are you arresting me, officer?'.

From here it's busy dual-carriageway Millbank (past Tate Britain) on the north side, or a riverside promenade (past the SIS building, from where security monkeys will have binoculars trained on you) on the south side; access it via the upriver side of the bridge. Now we're getting into serious tourist-view territory. Lambeth Bridge is about half a mile away.