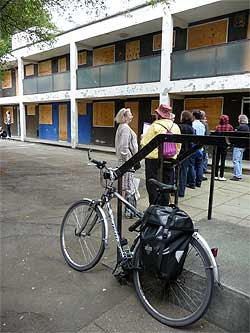 On a whim en route home the other day, in that way you can do on a bike, I dropped in to experience Roger Hiorns' Turner-nominated work Seizure.

It's a flat in a derelict council block by the Elephant and Castle which was filled with warm copper sulphate, left, and finally drained to reveal walls and ceilings encrusted with fist-sized blue crystals: a sort of gleeful mix between a childhood chemical garden run amok, and a nightmare case of council-flat mould.

There's no bike parking, but you can shackle up to the railings on the stairs to the unused first floor, and the phantom residents won't mind. 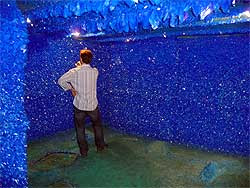 The flat was open earlier this year but whenever I went the queues were round the block. Now, with the work's Turner nomination in mind, it's been reopened until 18 October (Harper Rd, Thu-Sat 11am-7pm, Sun 11am-5pm, free).

And the queues have shortened, so you shouldn't have longer to wait than it takes to text a couple of friends to say 'I'm just waiting for a drain'. 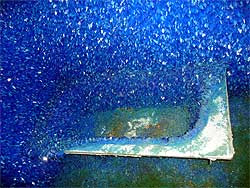 You can walk right around the flat and feel the crystals' beautiful, soap-coal sharpness. If you think your own bathroom couldn't be in a worse state, this one should reassure you.

It's nice to be able to explore a Turner nomination by bike (the main exhibition runs at Tate Britain from 6 October, with the winner announced on 7 December). And it made me wonder about bike connections of previous winners. 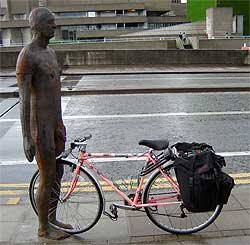 House, Rachel Whiteread's controversial 3D negative of a dwelling off Roman Road that won in 1993, was demolished in 1994, so there's nothing to bike and see there. The 1994 winner Antony Gormley created a series of life-size statues placed around London for a few weeks in 2007, and one of them, on Waterloo Bridge, proved an unintended but handy impromptu bike park (right).

Damien Hirst, winner in 1995, was in the news last month for designing a special Tour de France bike for Lance Armstrong encrusted with real butterfly wings.

Grayson Perry, who won the 2003 prize despite or perhaps because of his strange habit of appearing in public displaying pottery, wrote a well weird book called Cycle of Violence about a champion racing cyclist who becomes a serial killer. There seemed to be a bit of cross-dressing involved too, but I daren't flick through slowly enough in Tate Modern's bookshop to find out. 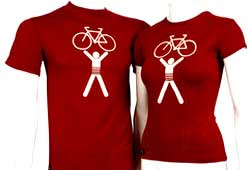 But the cycling king of the Turner Prize winners is, of course, Jeremy Deller. A real cyclist himself, when he won in 2004, his winner's speech dedicated his victory to all London's cyclists. With Southwark Cyclists in mind he also designed a bike-celebrating T-shirt – yes, I've got one, and you can still buy them from Tate's online shop. Jeremy, we salute you.

So, there you have it: you can use a Turner Prize winner's cycle-related artwork without having to be Lance Armstrong, and without cruelty to butterflies.