I was in London yesterday, investigating the new addition to my 2009 Bike Crossings of the Thames series.

Because on 28 June 2012, this new bike-capable river-hop opened between Greenwich Foot Tunnel and Woolwich Ferry.

The new option is the oddly named Emirates Air Line (picture). It’s a cable car service from north Greenwich (the O2, on the south bank) to Victoria Dock (near London City Airport, on the north bank). And not something to pump up your tyres with. 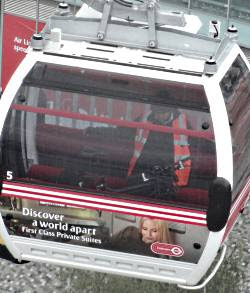 It styles itself as a ‘flight’ in the same irritatingly gimmicky way as the London Eye, and all the (very pleasant and helpful) staff wear airline-style uniforms.

Which is enough to make you reach for the sick bag. Except they don’t supply any, which proves it isn’t really a flight at all.

At least they don’t charge you £6 booking fee or demand £8 per carry-on bag, either. 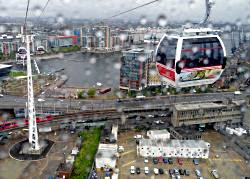 Views during the five-minute crossing are stunning. Unless (picture) you go during a period of relentless drizzle and rain, or to give it its technical name, ‘2012’. 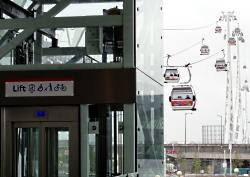 The stations – which are just like underground stations, with Oyster touch-ins, no toilets, and so on – have normal ticket gates, wide enough for bikes, and provide lifts encouragingly marked with a bike symbol to take you and machine up to or down from the boarding area (picture). There are also several bike racks outside the southern, O2, station (picture), if you’ve come to do a return trip, or perhaps just spectate and head on along the nice traffic-free cycle path on the south side past the Thames Barrier to Woolwich.

So, the new Air Line is bike-friendly, and joins the canon of Thames Bike Crossings. Probably not enough room in the cars for more than one bike, or tandems or trailers or recumbents, but otherwise you should be OK.

From here it's only a couple of miles to the Woolwich Ferry. 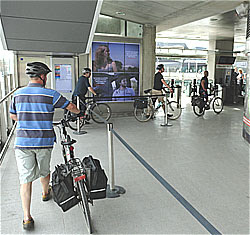 More pics here, from a recent journey done with a group of cyclists. 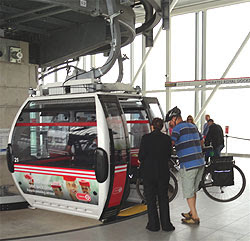 Numbers are not a problem, and staff are bike-friendly, helping you into the cabins with your bike. 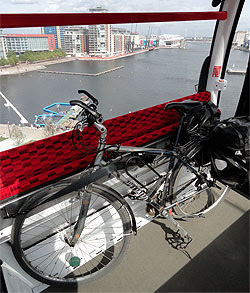 Inside the cabins, the seats tip up to make space for one or two bikes.