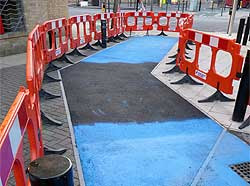 We now have our first glimpse of London's Cycle Superhighways. Work started this week at Westferry DLR station, a mile or two east of Tower Bridge, and the lids came off the tins of blue paint.

The project will see twelve routes that provide 'safe, fast, direct, continuous and comfortable way of getting from outer London into central London by bike along recognised commuter routes'. The first two (Barking to Tower Gateway, and Merton to the City) are scheduled to open in May. Er, no, make that 'early summer'. Well, Septemberish maybe. Before Christmas, definitely, anyway. 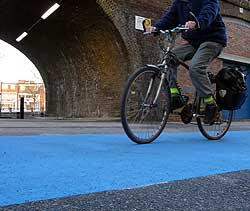 And now you can cycle along the very first bit of blue strip, just by Westferry station. Transport for London have produced some enticing DVDs, posters, booklets, information packs and even interactive cycling simulators. Now we have an idea of what the Superficial Cycleways will actually look like. 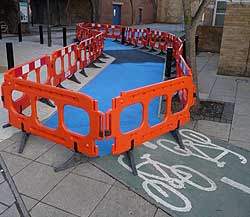 Well, this first section is a bit zig zaggy, to be honest. Four 45-degree bends within the space of a cricket pitch: it's like facing Shane Warne on a crumbling fifth-day wicket. There's rather a lot of giving way too. And it's nowhere near wide enough for a stream of commuting cyclists. 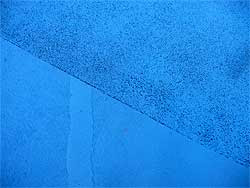 But no doubt about one promise that's been kept: it's a lovely shade of blue. Hah! Take that, naysayers, doubters and pessimists! You could be in Copenhagen! 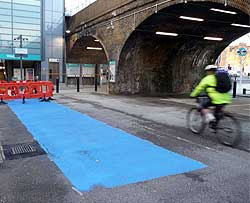 But get along to Westferry and get your glimpse of the future. The good news is, it really works. There's an amazing sensation of speed and directness - it feels like only a few seconds to cycle from one end of this blue strip (right) to the other, for instance.

So in a few months' time, this is just what we'll be seeing all over London: cyclists finding the blue strip is too crooked, discontinuous and narrow, and just using the road alongside instead.