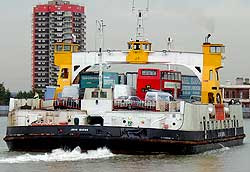 Downriver from Greenwich Foot Tunnel is Woolwich Ferry. And there's no charge for using it. So there really is such a thing as a free launch.

The ferry (two boats on weekdays, one at weekends) runs every ten minutes (15 minutes at weekends) from 6am to 8pm. Outside these times you'll have to use the tunnel a few yards downstream. 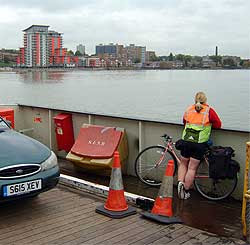 In one form or another the service has been going since 1889. It’s free because it’s the aquatic link from the North Circular to the South Circular, and its short approach roads carry regular queues of cars, lorries with CLEAN ME fingered in the grime on the back, and the odd bus. (Any other British bus routes involve ferries? Discuss.)

On a bike you can head straight up to the front of the road queue and be first on the car deck when they let you on. If you wheel your bike along the footpath they’ll let you on the ferry with the passengers, but you’ll have to schlepp it up and down some stairs; the road approach is better, and the car deck has better views.

It may not be San Francisco or Hong Kong, but it's got a grimy charm and you can see the Dome's sleeping hedgehog, Canary Wharf's inscrutable towers, and the Thames Barrier's alien landing-craft upstream. And it's free, so ha! Take that, Sausalito Ferry ($7.45)! Take that, Star Ferry (HK$6 plus HK$18 for bike)!

As the boat pulls away from the jetty, there’s a safety announcement telling you what to do in case of an emergency on the five-minute crossing. Seasickness is unlikely to be a problem. 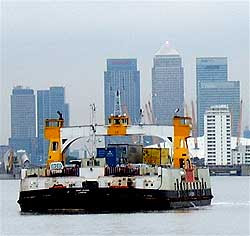 If you get time to go downstairs, you’ll find it looks much like a ferry down there: a maze of metal doors and portals to empty rooms marked No Entry, boxes of mystery equipment for survival adrift, and framed lists of regulations in microscopic 1960s type. And no, there's no bar or buffet.

Should you be taking advantage of the freeness by doing a return trip immediately, you’ll be asked to go off and come on again.

From here it's only a few yards to Woolwich Foot Tunnel.