Downriver from the Hilton Docklands-Canary Wharf Ferry is Greenwich Foot Tunnel. The 370m-long tunnel opened in 1902. You're not allowed to cycle in the tunnel, even though it's part of National Cycle Route 1 linking Dover with Inverness: you push through what feels like a tiled drinking straw. On a hot day the iced-drink coolness of the tunnel comes as a relief. 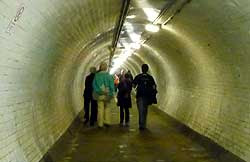 The tunnel is free and open 24 hours a day. You enter by a small brick roundhouse at either end (bottom right). Access during the day is through two splendid wooden-panelled lifts more like Edwardian drawing rooms. They should have a piano and aspidistra in them, and attendant with a waxed moustache reading the Penny Illustrated Paper. There is an attendant, but he'll be reading The Sun. Outside these times, or if the attendant has seen you cycling in the tunnel on the CCTV and refuses to let you in the lift, you have to lug your bike up a long spiral staircase. You're not supposed to take photos inside the tunnel (right) either. 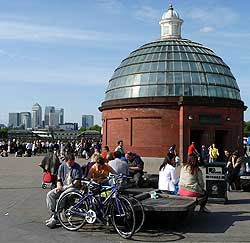 From here along the north side there's no riverside path to Woolwich, only scruffy roads up to the Lea Crossing and then the strange Singaporish new development of Victoria Dock, with its floating hotel, beach and airport. The south side is fabulous though: a traffic-free riverside path that takes you past the wonderful old Naval College, characterful old pubs, dilapidated old factories, the O2 dome and Thames Barrier, with the three huge towers of Canary Wharf looming over you from the other side like wickets in a celestial game of Twenty20. There's a Google map of both routes between here and Woolwich on the website of my book. Either way it's about six miles from here to Woolwich Ferry.
Posted Tuesday, May 12, 2009