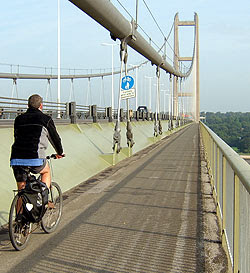 I'm up in Hull again, where I grew up. It was famously adjudged Britain's Most Crap Town in 2003 - narrowly edging out Cumbernauld and Morecambe – though that was followed by a counter-chorus of support from people who'd had good student times there and were rather fond of the place. (Well, yeah, but... I had a great time as a student in New Cross.) It's now best known to many as the Premiership side that didn't quite get relegated this season, which is a step up I suppose.

It's also touted as a cycling city, with 12 per cent of journeys to work made by bike according to the 2001 Census. As I've never actually had a job in Hull, like all too many of its inhabitants, I can't comment on the feeling of rush-hour on Alfred Gelder Street. But that figure is four times higher than London's. So take that you poncy load of southern soft-lifers, with your cappuccino machines and organic tofu and four-grand road bikes. You want real cycling? Then ditch your helmet and migraine-coloured jacket and pedal a creaking house-clearance Raleigh Wayfarer to a chip shop on Hessle Road. 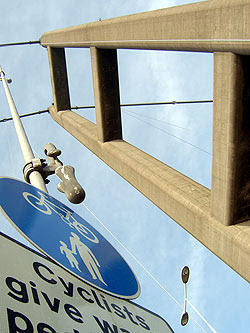 But watch out. Within the hour you'll be picking up that lercal accent where you say er ner, me merbarl phern's bin sterlen. It happens to me, too: gradually my central RP vowels shift erver to the East Cerst, and that bland BBC intonation resorts to a windswept Holderness lilt.

Anyway, Hull still offers a world-beating experience: to ride across the Humber Bridge. When it opened in 1981, it was the longest single-span suspension bridge in the world, with towers 1410m apart. Today it’s only fifth in the main-span league table. But if you turn up on your bike hoping to cross the Akashi-Kaikyo in Japan (1991m), Xihoumen in China (1650m), Great Belt in Denmark (1624m), or the Runyang in China (1490m), you’ll be turned away, because they don't allow bikes.

Well, sod the lot of them! Come to the longest bridge in the world that welcomes cyclists instead! The estuary may be the sort of brown usually found on stray dogs; the most vertical points on the surrounding scenery may be the distant hazy smokestacks of Grimsby and Immingham; and it may only join a city of 300,000 people on one side with some turnip fields on the other. But you can enjoy it by bike! 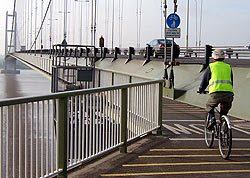 And cycling is, in fact, the ideal way to enjoy the world’s fifth-longest – but still best – single-span suspension bridge. In a car you can’t stop to admire the engineering; on foot it’s just too damn far across. But bike pace, as usual, is just right. You feel the awesome scale and precarious isolation in the middle, but you’re only a few minutes from coffee and cairk.

The north side – with Hull on it – has gorra large car park and viewing area right next to the tower. There’s alser a friendly information centre, and thuzza cafe wot's erpen every day. Therra some sarns worrell tek yer to the shared pedestrian-cycle footpath on the west saird. Thuz another path ont' east saird burrit alwez seems ter be clersed these days. The path's quite ward and smooth anywair. And thuz them big towers wot look like rocket launchers. 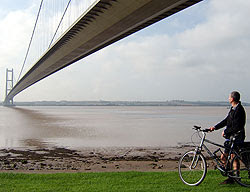