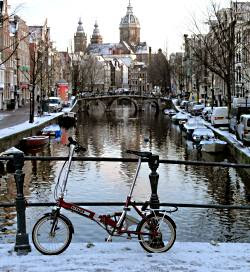 I've just got back from a few days in Amsterdam. Everyone cycles here of course, except stag-party Brits, so I took a bike (picture) to ensure I wasn't mistaken for one of them. It worked: the prostitutes ignored me.

Also, when I bumped into another cyclist, momentarily forgetting which side of the cycle path I should be on, he swore and threatened to kill me in Dutch. I was delighted, as I had been taken for a local.

Anyway, I took my folder, taking advantage of a five-quid Megabus each way - thus ticking two boxes much approved of by our Netherlands chums: 'bike use', and 'economy'. 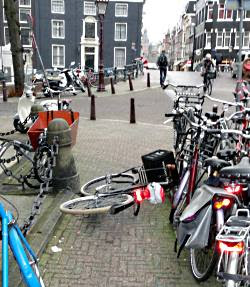 It was snowy, blustery and cold, but Amsterdam's streets were still thronged with bikes. So were the pavements (picture), littered by fallen machines whose kickstands failed. Most parking is not Sheffield stands or racks, it's just a painted square of pavement where you stand and self-lock your town clunker. 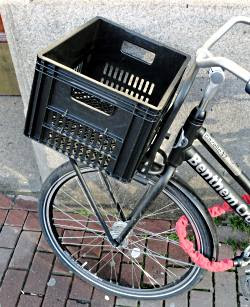 The preferred luggage carrying option is the black plastic crate (picture). Wicker baskets are rare. Perhaps they've smoked them all. 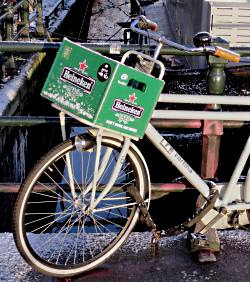 Some baskets make a statement. My favourite was this beer crate (picture), though I'd have preferred Amstel, as that's the other river Amsterdam is on, apart from the IJ. Much English keg beer also celebrates a well-known river, the Piddle in Dorset.

Thanks to the amount of people on two wheels, cycling feels a normal and safe thing to do. High-visibility clothing is evidently unnecessary, and few people bother with lights. The only red lights I saw were in those prostitute booths I cycled past unacknowledged. In fact, most riders seemed to be listening to their iPod, texting, web surfing etc, with little negative impact on safety. 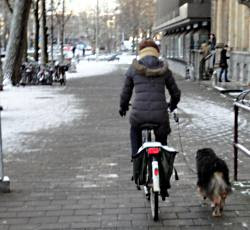 Many even walk their dog (picture). Some American viewers may be surprised to see that the dog is not wearing a helmet. 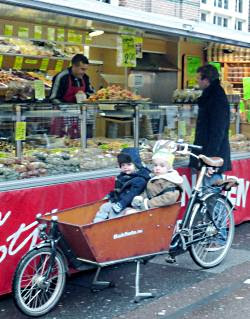 The bakfiets is a common way of transporting children around, such as this group in Albert Cuyp market (picture). The box is so big, it can accommodate two children, or one cheese.

Of course, I cycled gleefully round to some of the city's must-sees: cosy Jordaan cafes, snowy Vondelpark, quirky canalsides, the Rijksmuseum's Rembrandts, the Hermitage's van Goghs, the newly extended Stedelijk. Anyone who thinks the Stedelijk's art collection is a load of old rubbish is quite wrong. It's all modern. 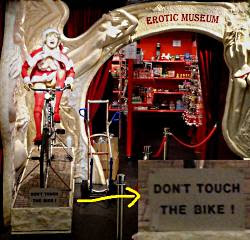